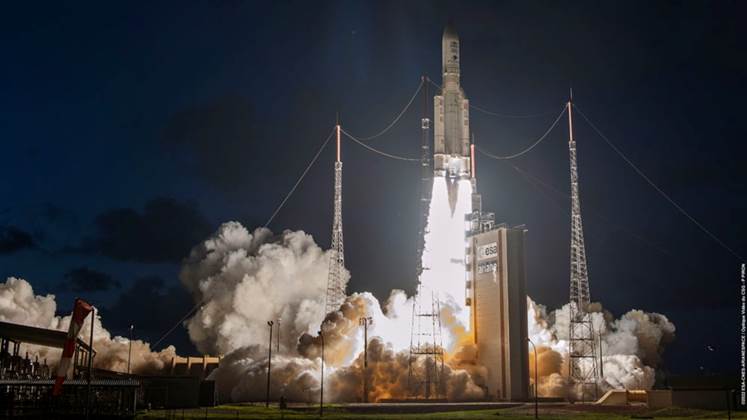 The Very High Throughput telecoms satellite (VHTS) will provide high-speed internet access throughout Europe, in particular in isolated regions with low coverage. For Arianespace it was their second launch of the year and the 114th mission overall.

“With yet another successful launch, Arianespace is proud to have placed in orbit, for the 37th time since 1983, a satellite for the operator Eutelsat”, said Stéphane Israël, CEO of Arianespace. “Eutelsat Konnect VHTS, built by Thales Alenia Space, offers capacity that will be able to connect underserved zones throughout Europe, providing them Internet access, which underscores how Arianespace uses Space to achieve a better life on Earth. Another success to the credit of both the European team of launchers and Ariane 5, which only has three more missions left before retirement.”

With an instantaneous throughput of 500 Gbps, the satellite will provide high-speed internet access throughout Europe, especially in isolated regions with poor coverage, delivering service on a par with fibre-optic networks in terms of performance and cost, thus making a significant contribution to bridging the digital divide. Eutelsat’s Konnect VHTS will also address the broadband connectivity needs of fixed and mobile telecommunications networks on land, sea or in the air.

The satellite was built in France by Thales Alenia Space around the Spacebus NEO all-electric propulsion platform. It carries a cutting-edge payload using disruptive technologies developed with the support of the French Government, via the French space agency CNES (Centre National d’Etudes Spatiales) and the ‘Investing in the Future’ programme (PIA), together with the European Space Agency (ESA). In particular, the payload includes the most powerful digital processor in the world, which combines agile capacity allocation, optimized spectrum use and support, and gradual deployment of network coverage on the ground.

“Ariane 5 is the champion of dual-launch and this evening performed the single launch of a telecommunications satellite to geostationary orbit for only the third time in its illustrious career. Ariane 5 thus demonstrated how versatile it is. The Ariane 6 will be even more so, able to adapt to all missions to all orbits, for the benefit of Arianespace’s customers”, said André-Hubert Roussel, CEO of ArianeGroup.

The Ariane 5 heavy-lift launcher is an ESA programme carried out in cooperation between public institutions and industry across 12 European partner states. The launches are operated by Arianespace.

After this mission, three Ariane 5 launches remain, including the JUICE mission, before Ariane 6, the next-generation version, will take up the baton.