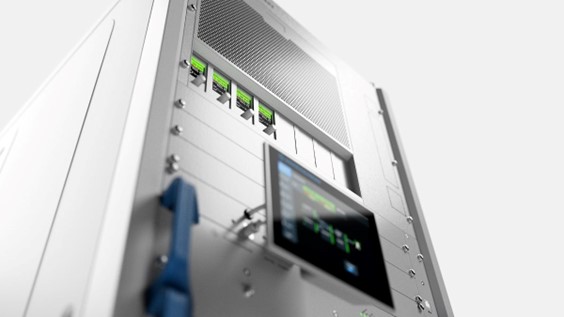 The R&STH1 is a liquid-cooled high power transmitter, with software-defined operation and the ability to work across all bands of UHF transmission. The design philosophy is to support the three critical challenges and opportunities for broadcast network operators: to reduce energy costs and carbon footprint; to increase operational efficiency and resilience; and to unlock new broadcast applications, thereby creating new revenue opportunities for the operator.

The improved power amplifier design delivers a dramatic increase in energy efficiency, representing a 15 per cent reduction in power consumption over even the most efficient of current designs, with a consequent reduction in carbon emissions. The sophisticated liquid cooling concept, allowing more than 90 per cent of all heat generated to be dispersed to the outside atmosphere, further reduces the energy requirements and total cost of ownership of an installation.

Internally, the design eliminates all single points of failure making the transmitter highly resilient, and enables self-repairing and remote monitoring, reducing the cost of routine maintenance, another significant saving in cost as well as boosting reliability.

According to the company, the R&S TH1 is ideally placed to deliver new services which are best handled by broadcast rather than mobile streaming. 5G Broadcast is a powerful solution for content to large numbers of concurrent users on mobile devices, either on a wide area basis or as a pop-up service, for example around sporting events or music festivals. 5G Broadcast is also the route to deliver timely data to IoT applications: for example, updated mapping and traffic information to autonomous cars.

“The R&STH1 delivers sustainable broadcasting in the connected world,” said Manfred Reitmeier, VP broadcast and amplifier systems at Rohde & Schwarz. “Consumers still watch linear television – two or three hours a day on average – and broadcasting is the best way to deliver it. What we have done with our revolutionary R&STH1 transmitter is to enable broadcast network operators to continue serving that key market with much greater cost-efficiency, reduced maintenance costs and higher resilience, and a much lower environmental impact.

“At the same time, we have enabled broadcasters to seize the advantages of new services,” he added. “As well as taking the advantages of linear multicast to mobile devices, this opens up new and valuable opportunities in the Internet of Things and in booming markets like the automotive industry.”