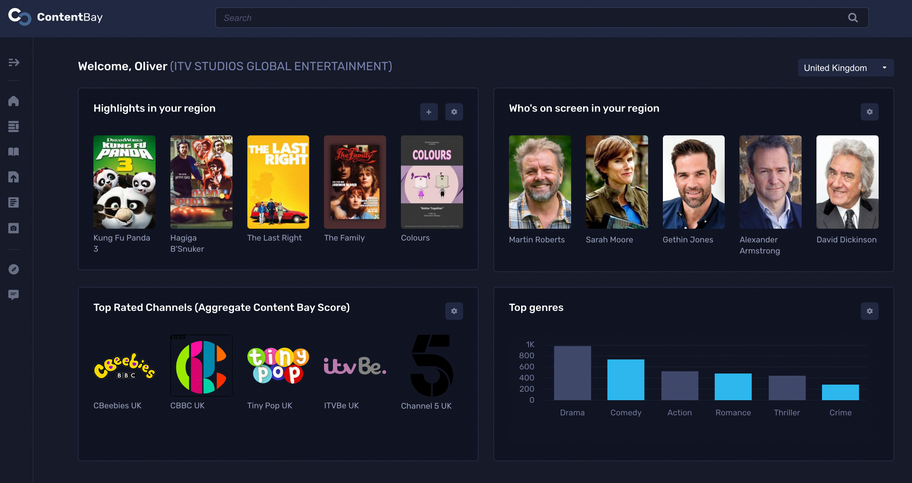 ContentBay says its intention is to “revolutionise the content marketing, distribution and media buying landscape. by providing a seamless way to make analytical and insight-led decisions when programming content, resulting in increased sales and better acquisitions, at the right price”.

With ContentBay users can search for movies, series, channels, platforms, producers, and cast, to name a few, from the global database with over 1 million titles, using even the most niche search terms to uncover specific content needs. Users can filter results with over 1 billion editorial, contextual and commercial datapoints and use the innovative features to make analytical and insight-based decisions when choosing the right content to target audiences.

Global CEO, and Co-Founder, Oliver Skelton, said: “The content industry has evolved at lightning rate, particularly over the last 10 years, characterised by the emergence of powerful technology platforms whose drive for growth had turned the traditional content marketplace on its head. With vast content ecosystems and almost unlimited consumer choice, the need for content is insatiable. But the process of content trading & marketing in the entertainment industry continues to operate in the same way it has for decades; personal contacts are important, but making countless phone calls, travelling the world, visiting trade shows, and filling in spreadsheets is clumsy, inefficient, and expensive”.

“By harnessing the power of state-of-the-art research and analytics capabilities, ContentBay is going to digitise the content licensing industry by allowing you to search, analyse and trade content in a seamless way. We want to be the world’s no. 1 online content marketplace where content distributors and platform owners coexist and trade licences, in a content democracy,” added Skelton.

ContentBay is launching with free trial for 30 days. Following that, monthly and annual subscriptions will be available from £70 per month.