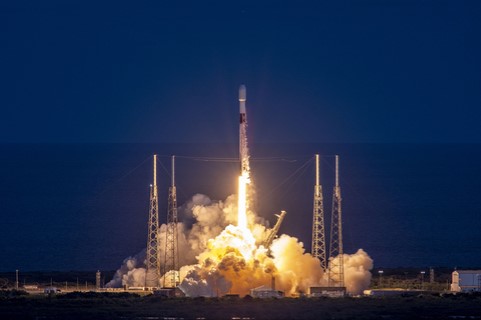 SpaceX successfully launched two satellites for Intelsat on October 7th from Cape Canaveral. The pair will help provide C-band transmissions to cable head-ends throughout the US.

Galaxy 33 and 34 were both carried within the Falcon 9’s fairing. The Falcon 9 booster was used for the 14th time, and tying for the joint record for use and re-use of the booster. It also means that SpaceX is increasingly confident that its boosters can be reused beyond their initial 10x design life.

Shortly after launch the booster returned to land on the ocean-going barge, and a probable re-use for the 15th time sometime in the near future.

As to the two Galaxy craft, they were confirmed by Intelsat to be healthy after their launch and while initially placed into a geostationary transfer orbit will be correctly located into their formal orbital positions over the next 10-11 days. The pair will replace two aging Intelsat satellites, Galaxy 12 and Galaxy 15, that have been orbiting since 2003 and 2005.

Galaxy 33 carries the all-important C-band payload but also steerable Ka and Ku-beams and will be placed at 133 degrees West. Galaxy 33 will fill the gap left by Galaxy 15 which went rogue in August following a powerful geomagnetic storm.

Galaxy 34 is a pure C-band satellite, and will replace Galaxy 12 at 129 degrees West.

The two satellites will beam C-band channels to North American head-ends, and are part of Intelsat’s obligation to the FCC to free up spectrum for re-use for 5G operators.

Intelsat still has another five satellites to launch. Galaxy 31 and 32 should launch early in November, again aboard a SpaceX rocket. Galaxy 35 and 36 are due to fly aboard an Arianespace rocket in December. The final Galaxy (37) will launch next year, again using a SpaceX Falcon 9.