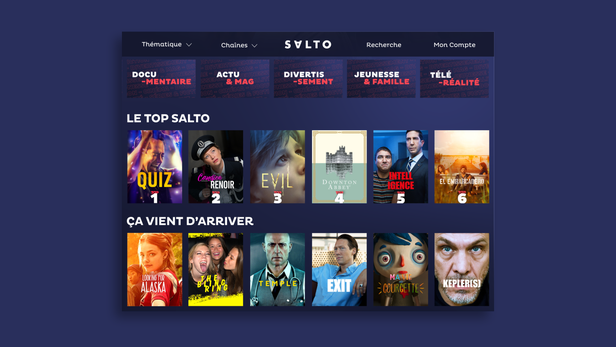 Following the collapse of the planned TF1-M6 merger, SVoD service Salto – the joint venture between PSBs France Télévisions, the TF1 Group and the Groupe M6 – has raised its subscription fee, opting for a €7.99 one-price, commitment-free monthly package (or €69.90 a year).

The platform is now making its content, both exclusive and catch-up TV programmes from its shareholders, available on three screens.

Claiming some 700,000 paying subscribers (900,000 in total), Salto is accessible on mobile devices as well as on IPTV, after it has concluded a deal with Bouygues Telecom. The platform isn’t yet carried on Orange, SFR or Free.

The service, which is aiming to pass the 1 million subscribers mark soon, is reported to generate a €69 million annual revenue.

Its managing director, Thomas Follin, claims Salto’s financial performance remains healthy and that it keeps close to its original local-rooted and popular positioning – a different proposition offered by US competitors such as Netflix, Prime Video and Disney+.

The financial potential and future of the service is still uncertain though. Rodolphe Belmer, TF1’s new director general, is unsure as to whether he wants to pursue the project. Both TF1 and M6 have been developing their own streaming services, with AVoD or pay options (MyTF1 Max, 6Play Max).

Following the aborted merger, a deal struck with France Télévisions to dispose of its 33 per cent stake in Salto has been nullified. Salto’s future will depend on how long TF1 and M6 consider it as a complementary offering.