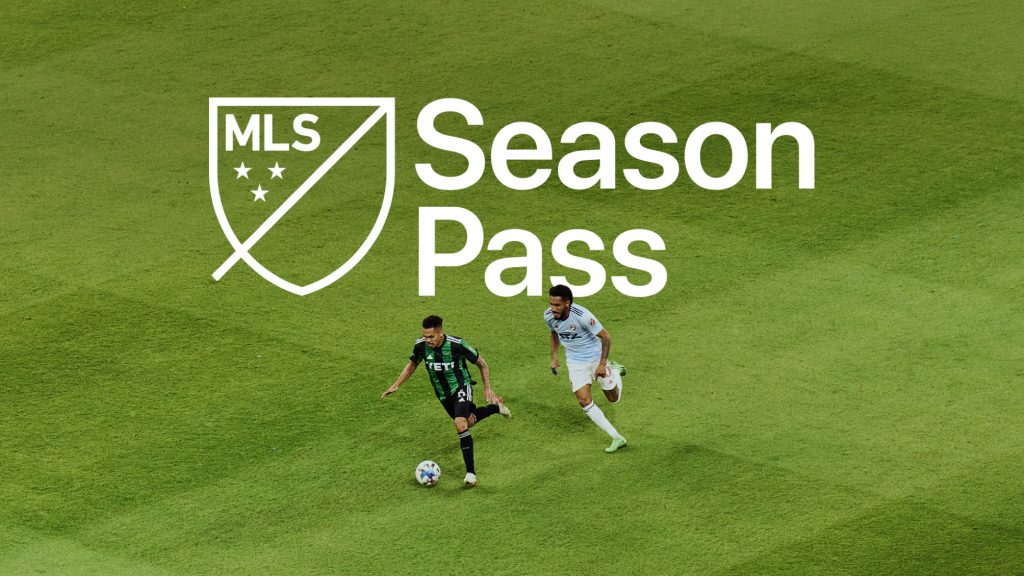 Apple and Major League Soccer have confirmed that MLS Season Pass will launch February 1st 2023 — introducing a subscription service to fans in over 100 countries and regions that features every live MLS regular-season match, the entire playoffs, and the Leagues Cup, all with no blackouts.

MLS Season Pass will bring MLS to its biggest worldwide audience ever, in what Apple says is a simpler and streamlined way: All matches will be available on billions of devices through the Apple TV app on Apple devices, smart TVs, streaming devices, set-top boxes, and game consoles, and the web at tv.apple.com. The launch of MLS Season Pass marks the official kick-off of the 10-year partnership between MLS and Apple, which they say is a historic first for a major professional sports league.

In addition, 2023 expansion club St. Louis CITY SC has unveiled its jerseys for the inaugural season of the club and provided the first look of the Apple TV sleeve patch. All 29 clubs will have the Apple TV patch in a different colour, with the rest of the clubs’ jerseys to be shared in the weeks leading up to the start of the 2023 regular season.

“There isn’t a more perfect time to introduce MLS Season Pass, coming off the heels of the most dramatic MLS Cup in history and with MLS as the fastest-growing soccer league in the world,” said Eddy Cue, Apple’s senior vice president of Services. “We’re counting down the days to February 2023 when fans everywhere can enjoy MLS Season Pass on billions of devices — all with no blackouts.”

“We could not be more excited to bring our fans MLS Season Pass, a new home for all MLS matches and a wide variety of league and club content they can’t get anywhere else,” said Don Garber, MLS’s commissioner. “We have the most engaged and passionate fans in sports, and now they’ll have every match everywhere with MLS Season Pass.”

MLS Season Pass will be home to the most expansive and accessible programming line-up ever for MLS fans, including all MLS and Leagues Cup matches, as well as hundreds of MLS NEXT Pro and MLS NEXT games during the season. During match days, MLS Season Pass will feature an exclusive live match whip-around show so fans never miss an exciting goal or save, as well as game replays, highlights, and analysis. Starting February 1st, fans can subscribe to MLS Season Pass on the Apple TV app for $14.99 (€14.44) per month during the season or $99 per season, and Apple TV+ subscribers can sign up at a special price of $12.99 per month and $79 per season.

Launching February 1st, 2023, MLS Season Pass will be the exclusive destination to watch every live MLS regular-season match, the entire postseason, and the Leagues Cup — all with no blackouts.

As previously announced, the MLS 2023 regular season will kick off on February 25th. The first home opener to be revealed so far is the 2022 MLS Cup champions Los Angeles FC against the LA Galaxy in a historic match showcasing Los Angeles’ marquee football rivalry at the Rose Bowl Stadium — the first MLS regular-season match to be played there since 2002. All matches during the ‘MLS is Back opening weekend will be available to watch for free on the Apple TV app.

Fans will be able to watch MLS matches featuring English and Spanish broadcast crews, and they can easily listen to a club’s home radio broadcast on the Apple TV app. All matches involving Canadian teams will be available in French. Matches will take place primarily on Saturdays and Wednesdays, with a few matches held on Sundays. For most matches, the start time will be 7:30 p.m. local time, with pregame coverage beginning at 7 p.m. ET. A few matches each week may air at other times.

Major League Soccer’s complete 2023 schedule will be announced in mid-December.

MLS Season Pass will provide fans with in-depth coverage of their favourite clubs every week throughout the season, starting with previews of each upcoming match. On match day, fans will have the ability to watch any match from the start, no matter when they tune in. After the final whistle, fans can watch match replays, highlight packages, and more so they can catch up on anything they missed on and off the pitch.

A subscription to MLS Season Pass will be included as part of full-season ticket packages with MLS clubs. A selection of MLS and Leagues Cup matches, including some of the biggest playoff matchups, will also be available at no additional cost to Apple TV+ subscribers, with a number of matches available for free on the Apple TV app.

Additional details about the MLS Season Pass broadcast teams, production enhancements, as well as all the ways fans can enjoy MLS content across the Apple ecosystem, will be announced in the coming weeks.

“The lack of coverage in 4K is disappointing with most if not all TVs sold and streaming devices now supporting this format,” notes Paolo Pescatore, TMT analyst at PP Foresight. Fans now demand the best picture and audio for watching sport. A season pass should be the most attractive option to fans,” he suggests.

“There are still some unknowns and question marks on production, interactive features and efforts to drive adoption outside of North America. Apple cannot afford to make any mistakes as it is a new player in football and generally in sports. It is a new destination for fans and needs to build credibility in order to gain trust. While, success is not guaranteed, its collaborative approach with MLS puts both parties on the right path to generate interest. Apple is now extending its proven strategy of broadening its portfolio of devices in each segment to cater for everyone, into services. A move that will broaden the appeal of Apple TV+ to all users in a household, catering for all needs,” he says.

“Apple’s growing installed base of iOS devices is attractive to MLS,” he advises. “For now, it feels like a win for fans as all matches will be in one place with no restrictions/blackouts. Last but not least, this seems like a pivotal moment and ushers a new era of sports rights and opportunities for streaming. Other sports associations/leagues will be looking at this deal very closely and the opportunities to connect with new audiences,” he predicts.

Sports clearly represents the next battleground for ownership of the living room among the big tech companies. It drives users to watch TV live and allows Apple to tap into a lucrative ad space for the company. The MLS long term deal underlines an insatiable appetite to drive usage, engagement and in turn opens up new revenue opportunities around advertising, sponsorship and other areas,” he concludes.