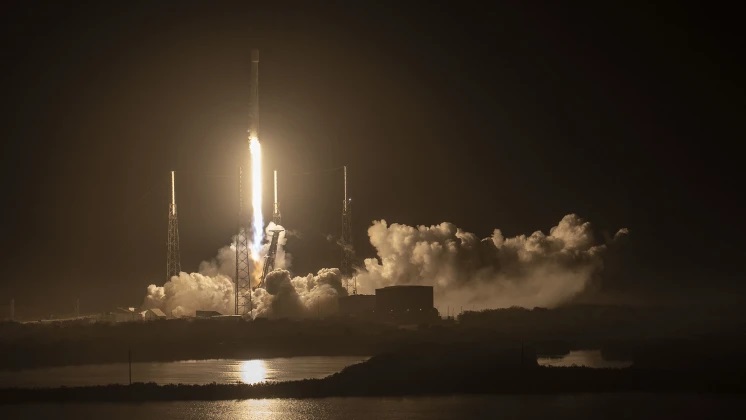 SpaceX managed to avoid a major threat from Floridian weather in order to launch Eutelsat’s 10B satellite from Cape Canaveral late at night on November 22nd. A Falcon 9 Block 5 rocket carrying the satellite lifted off from Space Launch Complex 40 at the Cape Canaveral Space Force Station in Florida at 9:57 PM EST.

It had been delayed from an initial attempt on Monday November 21st, not helped by a need to double-check technical problems. Monday’s weather conditions meant a very unfavourable forecast.

That miserable forecast spoke only of a 10 per cent chance of a flight, but the small opportunity coincided with the launch schedule and the countdown commenced. The weather ended up cooperating at launch, and Falcon 9 was able to lift off successfully. Confirmation that all was well came a few minutes after launch.

The Falcon 9 booster was the oldest active booster in SpaceX’s fleet. Booster B1049 was the fourth Falcon 9 Block 5 produced and has supported 10 previous missions. Following the launch, the Falcon 9 fleet remaining in service is 12 boosters strong.

The booster was not recovered after launch.

Eutelsat 10B carries 36 Ku-band and 20 C-band transponders and will provide inflight and maritime connectivity services over the North Atlantic corridor, at the centre of Europe, the Mediterranean basin and the Middle East, with visibility across the Atlantic Ocean, Africa and the Indian Ocean.

The satellite will carry two multi-beam High Throughput Ku-band payloads: a high-capacity payload, covering the North Atlantic corridor, Europe, the Mediterranean basin and the Middle East, offering significant throughput in the busiest air and sea traffic zones, and a second payload to extend coverage across the Atlantic Ocean, Africa and the Indian Ocean.

Built by Thales Alenia Space, it has a design life of some 15+ years.

Pascal Homsy, Eutelsat Chief Technical Officer, added: “This is the fourth launch for Eutelsat in just under three consecutive months, quite a remarkable and unequalled technical achievement; congratulations to all! Eutelsat 10B’s Ku-band payload complements the Ka-band of the Eutelsat KONNECT VHTS satellite, launched in September 2022, reflecting our ability to serve our customers in both Ka- and Ku-bands with the best-in-class space assets.”

“After the launch last September of the KONNECT VHTS satellite dedicated to bridging the digital divide in Europe, I’m thrilled with the successful launch of Eutelsat 10B, which will enhance connectivity for the aviation and maritime sectors,” said Hervé Derrey, CEO of Thales Alenia Space. “This latest achievement reflects our ability to develop new telecommunications solutions, working with our customer Eutelsat and with CNES and ESA, whose support has been vital as we strive to meet current and emerging market needs.”