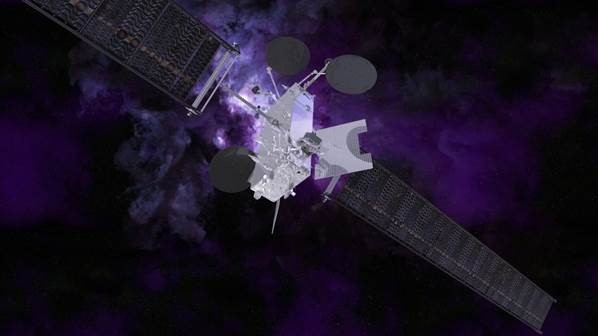 Eutelsat says that this ‘New generation’ of high-throughput, software-defined satellite, allowing flexibility and instant reconfigurability, to adapt to changing missions. It will reinforce Eutelsat’s in-orbit assets to serve surging demand for Connectivity in the Americas.

The Flexsat (for flexible satellite) will be based on Thales Alenia Space’s cutting-edge ‘Space Inspire’ (INstant SPace In-orbit REconfiguration) product line, enabling seamless reconfiguration and instant in-orbit adjustment to offer an optimum level of customer service, maximising the effective use of the satellite resources, says Eutelsat.

“The new satellite will expand Eutelsat’s in-orbit assets providing more than 100 Gbps of incremental capacity over the Americas to support the surging Connectivity market. Its performances combined with the high level of flexibility in terms of coverage, bandwidth allocation, and power levels, will offer an unparalleled quality of service to Eutelsat’s B2B customers for its ADVANCE backhauling, enterprise, government, aero, and maritime solutions,” adds Eutelsat.

Importantly, given that Eutelsat is in the process of merging with low Earth orbiting satellite operator OneWeb, the new satellite will also be able to accommodate joint GEO-LEO services, specifically in zones where demand is highly concentrated.

The Flexsat is expected to be delivered in 2026. The capital expenditure associated with the programme is embedded in Eutelsat’s standalone capital expenditure and adjusted discretionary free cash flow estimates for FY2022-23 and FY2023-24. It is also included in the financial trajectory of the proposed combination of Eutelsat and OneWeb.

Eva Berneke, CEO/Eutelsat, commented: “The uniqueness of a Flexsat makes it particularly convenient to optimise capacity and reconfigure services during the satellite’s lifetime, depending on applications and coverage areas. This new satellite will further underpin Eutelsat’s growth strategy aimed at addressing the booming Connectivity segment and it is also able to support joint GEO-LEO services. We are delighted to partner once again with Thales Alenia Space, and proud to be among the first customers of the innovative Space Inspire product line.”

“By ordering the first Software Defined Satellite of its fleet based on Space Inspire product line, Eutelsat has once again expressed its confidence in Thales Alenia Space, extending a long partnership recently marked by the launches of EUTELSAT KONNECT VHTS in September and of EUTELSAT 10B last week,” commented Hervé Derrey, CEO of Thales Alenia Space.