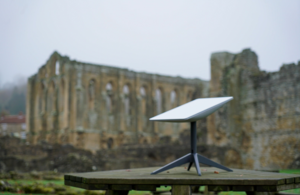 A trial has been launched to establish the extent to which satellites can be used to deliver high-speed connections to more than a dozen ‘very hard to reach’ UK locations – the less than one per cent of sites which are too difficult to upgrade via expensive physical cables in more extreme locations such as mountainous areas or small islands.

A 12th century abbey in the North Yorkshire Moors National Park, a scout camping site in Snowdonia, a Lake District mountain rescue base and other remote premises will have equipment installed that allows them to link up to a satellite orbiting the globe and benefit from broadband up to ten times faster than is currently available to them.

Following the trials, the government will consider the viability of using satellite technology to connect very hard to reach homes and businesses across the UK.

It comes as the government signs its biggest contract under its £5 billion (€5.8bn) programme to roll out gigabit-capable connections to hard-to-reach areas, Project Gigabit. The £108 million contract, awarded to Northern Ireland-based provider Fibrus, will connect up to 60,000 rural homes and businesses in Cumbria which might have otherwise missed out on upgrades to faster gigabit speeds.

Digital Secretary Michelle Donelan said: “High-speed broadband beamed to earth from space could be the answer to the connectivity issues suffered by people in premises stuck in the digital slow lane. Ensuring everyone can get a quality internet connection is crucial to our levelling up plans and these trials aim to find a solution to the prohibitively high cost of rolling out cables to far-flung locations. We are also today kicking off plans for our biggest broadband build to date as we announce another £100 million is being spent as part of our Project Gigabit programme.”

The Cumbria contract is the latest in a series of deals signed under Project Gigabit in recent weeks to level up the north of England, with projects now underway to connect thousands of hard-to-reach premises in Northumberland and Teesdale.

In a further broadband boost for rural areas, the government will triple the value of vouchers available under the Gigabit Broadband Voucher Scheme. From early next year, eligible homes and businesses will be able to apply for up to £4,500 to cover the costs of a gigabit-capable connection, up from £1,500 for homes and £3,500 for businesses previously, which will enable broadband providers to reach further into rural areas where the build costs are higher.

More than 72 per cent of the UK can access gigabit connections, up from just 6 per cent in early 2019, thanks to the government’s plan to drive investment in rollout and bust the barriers holding back the industry from doing so at full pace.

The initial wave of sites are being supported by equipment supplied by Starlink, given the readiness and availability of its technology. DCMS continues to discuss the capability of other solutions and services with suppliers, including the use of other providers such as OneWeb at more complex sites..

The £108 million contract awarded to Fibrus will cover rural towns, villages and hamlets across the region from Grasmere to Gilsland. Now the contract has been signed, Fibrus will begin construction of the network immediately with the first connections anticipated by the spring of 2023.

More areas including Cornwall, Hampshire, Shropshire & Telford, Cambridgeshire, Norfolk and Suffolk are all in line for contract awards by summer 2023.

Dominic Kearns, CEO of Fibrus, said: “Fibrus considers it a privilege to deliver a transformative project for Cumbria which will change the lives of people living in rural and regional areas. Fibrus is committed to supporting local communities, ensuring any work undertaken in our name supports apprenticeships and allows more people to reap the benefits of full fibre. This win helps us further our mission and commitment to bring fast, reliable and affordable broadband to all.”

The Gigabit Broadband Voucher Scheme ensure rural communities and businesses, which commercial suppliers are not planning to reach, can get more immediate help with the costs of installing a gigabit-capable broadband connection.

Businesses or residents that are eligible for gigabit vouchers can access the scheme through a  registered supplier. Suppliers can develop a project proposal to connect rural communities where there is demand for upgrades and then request vouchers on their behalf. Funding is only committed when a voucher requested has been approved by DCMS.

Exchequer Secretary to the Treasury, James Cartlidge, said: “Breaking barriers and driving competition in the telecoms sector will help deliver fast and reliable gigabit broadband to all corners of the UK. Using innovative methods to beam broadband to isolated areas, alongside this latest Project Gigabit deal to level up the north of England, will connect thousands more hard-to-reach premises, helping people get and stay connected.”