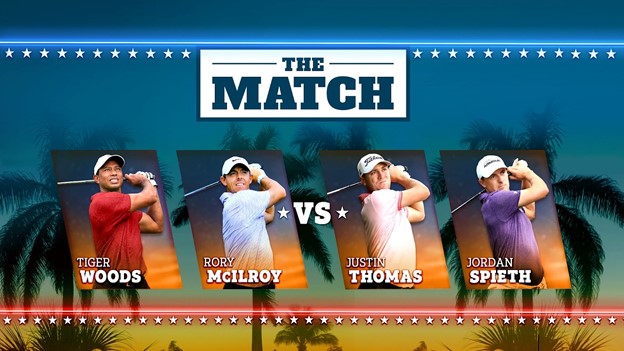 Four of the world’s top golfers will go toe-to-toe in Capital One’s The Match – the first time fans will be available to watch the annual event on Warner Bros Discovery platforms in Europe.

The iconic Tiger Woods is set to team up with Northern Ireland’s Rory McIlroy to face Americans Justin Thomas and Jordan Spieth – the quartet boasting 24 Major golf championships and each previously ranked number one player in the world. discovery+, Eurosport 2 and Eurosport App will broadcast coverage from December 11th with Eurosport.com and social platforms offering the best highlights, reports and reaction from Pelican Golf Club in Belleair, Florida.

Warner Bros Discovery has broadcast the previous six editions of The Match in the US and this year live coverage will feature unprecedented access. Players will have open mics throughout the entire competition, including the capability to communicate directly with their competitors and commentators. Veteran WBD Sports announcer Brian Anderson will host live coverage, with NBA Hall of Famer Charles Barkley, 2008 Masters Champion Trevor Immelman alongside Kathryn Tappen.

While McIlroy, Thomas and Spieth will be making their debut at the event, this will be Woods’ third time competing, splitting his two previous appearances, including a one-stroke victory alongside his partner Peyton Manning over Phil Mickelson and Tom Brady in May 2020.

Globally, Warner Bros Discovery-owned TNT will broadcast The Match from the United States, with simulcasts available on TBS, truTV and HLN, along with expansive content available across Bleacher Report’s platforms leading up to and during the competition. Elsewhere, fans will be able to watch through Golf Channel Latin America in LATAM; Eurosport in Asia; as well as on JTBC’s linear and digital platforms in South Korea and the SportsNet One network in Canada.

The golfers will compete in a 12-hole, Best Ball format. Each player on the team will play his own ball throughout the round. After each hole, the player with the lowest score in the hole on each team will serve as that team’s score, with the other player’s score thrown out for that hole.

The competition will be serving as a platform to benefit Hurricane Ian relief efforts, after the devastating effects of the storm on the Gulf Coast and its surrounding communities. WBD Sports has televised six editions of Capital One’s The Match, raising nearly $33 million for various charitable organisations and has donated more than 27 million meals through Feeding America.