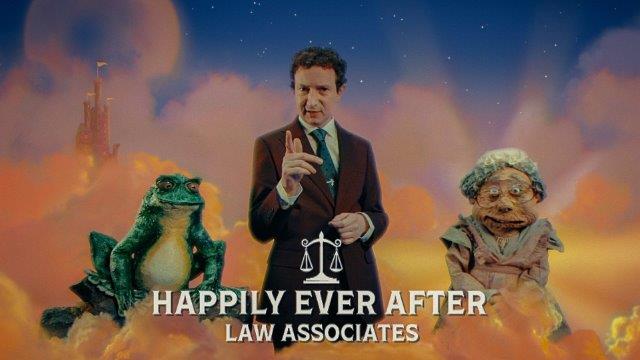 Thinkbox, the marketing trade body for UK TV advertising, is back on TV with a new advertising campaign from creative agency Mother London, directed by Jonny & Will from Blinkink. ‘Happily Ever After’ will be on linear and on-demand TV in the UK from December 26th.

Thinkbox’s new TV campaign – its seventh – tells the story of Michael Goose, a passionate and devoted lawyer, and his struggle to build his business, which deals exclusively with nursery rhyme-related injustices.

The ad dramatises a common story for many businesses: to go to the next stage of growth and scale up, they turn to TV advertising to drive new, widespread demand. With its ability to reach vast audiences, grab attention, engender trust, forge emotional connections, and make brands famous, TV helps brands jump over the moon.

“With businesses operating in increasingly tough conditions, it’s a good time to remind them that nothing works harder than TV advertising,” suggests Andrew MacGillivray, Thinkbox’s Marketing Director. “But we also want to do that in an engaging, entertaining way – to be a welcome guest in living rooms across the country.”

“There’s some outstanding TV advertising being made at the moment, and we hope that our new campaign – courtesy of the dream team of Mother London and Blinkink – will also help showcase why it pays to invest in creativity and craft.”

“The hardest part of working on this campaign was being brought face-to-face with the startling amount of injustice, malpractice and negligence which is so abundant in the world of nursery rhymes,” joked James Lucking, Creative at Mother. “We simply knew we had to do something about it. Fortunately, Thinkbox believe in ideas and care about the craft to tell this story. And Blinkink are the perfect partners to deliver on something this bonkers.”

“A nursery rhyme lawyer is a funny concept which immediately appealed to us,” admitted Jonny & Will from Blinkink. “Bringing nursery rhyme characters to life was always going to be fun, but creating a likeable lawyer at the heart of it was the challenge.”

“The documentary feel was inspired by classic Hollywood films about lawsuits and business guys, giving it an interesting edge.  Visually playing it straight and cinematic, with subtle puppet performances helped ground the characters in the real world.”

Thinkbox’s TV ads have been doing their best to entertain and catch the eye of marketing directors everywhere since 2009. This is Mother London’s second TV campaign for Thinkbox since it was appointed as its creative agency in 2019, following ‘Tooth Fairy’. Media planning and buying is by MediaCom.