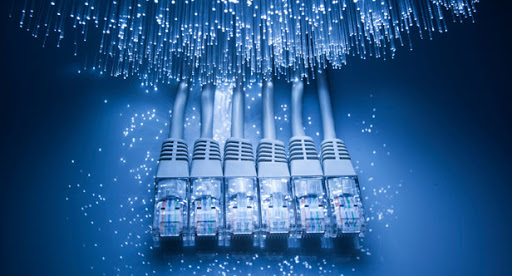 By the end of Q3 2022, the number of global fixed broadband connections grew by 1.87 per cent and stood at 1.34 billion. Point Topic recorded a decline in fixed broadband subscriptions in eleven countries which mainly include emerging markets, as well as a handful of mature markets of well developed countries. Other main trends in Q3 2022 included:

In Q3 2022, global fixed broadband subscribers grew by 1.87 per cent, with the number of connections reaching 1.34 billion. The growth was highest in the last four quarters but lower than in Q3 2021, as the world grapples with the economic recession.

Differently from Q2 2022, this quarter Point Topic recorded positive net adds in Eastern Europe due to the smaller drop in fixed broadband subscribers in Ukraine, with the country managing to maintain their broadband infrastructure functioning using power backups and continuously restoring it after damages caused by shelling.

East Asia has retained the largest regional market share of fixed broadband connections at 49 per cent, followed by Asia-Other and North America with 11 per cent each. Compared to Q2 2022, East Asia increased its market share the most (+ 0.3 per cent), while North America, Eastern Europe and Europe Other saw their market shares decline, though in all regions the changes were smaller than one percentage point.

In Q3 2022, the quarterly growth in the number of fixed broadband subscribers was higher than in Q2 2022 in all regions, as it is typical for the third quarter of a year. The most prominent increase in growth (2 per cent) was in Eastern Europe. In Q3 2022, Asia Other saw the fastest growth (2.6 per cent), mainly due to low broadband penetration and healthy increases in broadband subscribers in such large markets as India, Nepal, Malaysia and UAE.

Africa and Asia Other continue to have the lowest fixed broadband penetration among population at 4.4 per cent and 5.5 per cent respectively. Not surprisingly, the two regions recorded high quarterly growth of more than 2 per cent. So did the markets of East Asia and America Other, despite the former having the highest population penetration at 40.3 per cent.

All the largest twenty broadband markets saw fixed broadband subscribers grow in Q3 2022, but in six of them the growth was slower than in the second quarter of 2022. This was the case in Vietnam, Indonesia, UK Japan, Iran and Thailand.

Between Q2 2022 and Q3 2021, the share of FTTH connections in the total fixed broadband subscriptions went up by 0.7 per cent and stood at 61.4 per cent. FTTB accounted for another 4 per cent of the global total. Cable and ADSL broadband connections saw their market shares shrink further to 17 per cent and 9.4 per cent respectively. VDSL subscriber numbers grew in fifteen countries (including the large VDSL markets of Tunisia, Turkey, Czech Republic, Germany and Italy, for example), while they fell in at least nineteen other markets as consumers migrated to fibre.

In terms of FTTH/B broadband net additions in Q3 2022, China continued to maintain a huge lead with 15 million while Brazil added almost 1.5 million. Spain and Argentina got pushed out of the top ten league by Germany and Mexico this quarter.

Globally, in 12 months between Q3 2021 and Q3 2022, the number of copper lines fell by 9.8 per cent, while FTTH connections increased by 12.3 per cent. Satellite broadband connections recorded a 4 per cent growth, as this technology is increasingly deployed to enable users to access broadband where fast wired networks are difficult to deploy. For example, in the UK Starlink satellite broadband is being trialled in the remote areas of Northern England and Wales.

Wireless connections grew very little this quarter, mainly due to further significant decline in traditional FWA subscribers in the Philippines as consumers chose other platforms such as fibre and 5G. 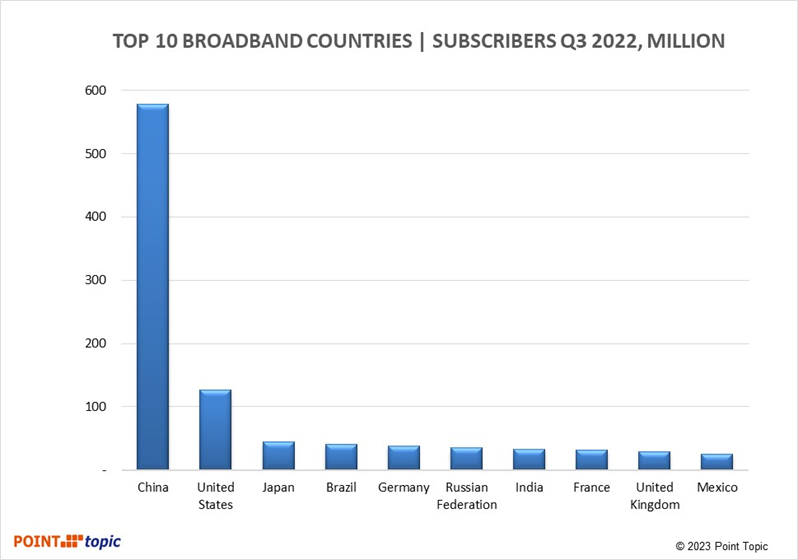