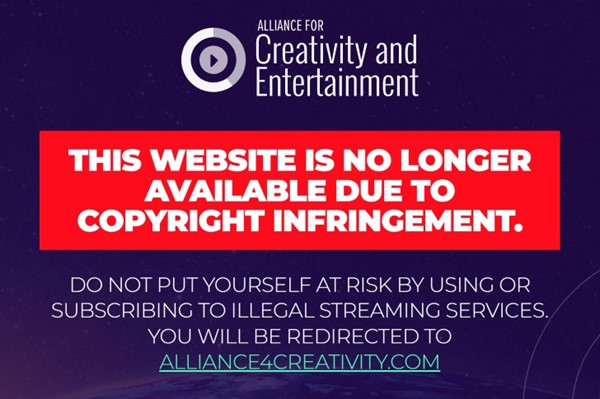 The Alliance for Creativity and Entertainment (ACE), the coalition dedicated to protecting the dynamic legal ecosystem and reducing digital piracy, has shut down two additional piracy operations based in Latin America.

The first operation, YMovies, ranked among the top 25 US rogue streaming services and averaged about 2.5 million visits per month. A coordinated investigation between ACE’s US and Latin American teams identified a suspect, a male Colombian national, who ultimately connected ACE with the service’s alleged actual operators. Four streaming services were consequently shut down; the two largest had a combined 9.9 million average monthly visits.

YMovies.to, the main domain, was transferred to ACE; transfer of the remaining three domains are currently in progress.

The second operation, HDFoxCDN, was a ‘Piracy as a Service’, which provided a one-stop-shop for individuals looking to operate illicit piracy sites. ACE is increasingly focused on combating PaaS operations, which represent a growing concern in the anti-piracy community.

ACE investigators also uncovered an additional 19 streaming domains that the suspect allegedly operated or owned, which together amassed an average estimated 1.92 million visits per month. The suspect, a 26-year-old Brazilian man, agreed to cooperate, took down all the ring’s domains and transferred them to ACE.

The HDFoxCDN services offered an estimated total of more than 20,000 film and TV titles.

“ACE is making great progress fighting piracy across Latin America and protecting the region’s growing creative community,” declared Jan van Voorn, Executive Vice President and Chief of Global Content Protection for the Motion Picture Association and Head of ACE. “I’m particularly proud of how well our Latin American and US teams coordinated to identify and take down the Ymovies operation. Piracy is a global challenge that demands the kind of global coordination that ACE is uniquely positioned to provide.”