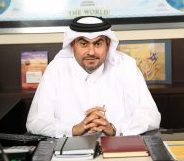 Ali bin Ahmed Al-Kuwari, CEO at Qatar-based Es’hailSat, has called into question the role of intergovernmental agencies, such as the International Telecommunications Union (ITU) and their lack of action over the on-going piracy by Saudi Arabia of beIN Media’s channels and in particular sports transmissions.

There is consistent wholesale piracy of beIN’s output by beoutQ, and considerable diplomatic tension between Saudi Arabia and Qatar.

Speaking exclusively to Advanced-Television ahead of the CABSAT show in Dubai, he stresses that like almost all of the major broadcasters and satellite operators in the MENA region, Qatar’s Es’hailSat is a member of the local Anti-Piracy Coalition.  Al-Kuwari says that piracy is a “hot topic” at the meetings. “We try and support those affected by protecting them and giving them the very best quality of service. But if the proper regulations are ignored, and the pirates refuse to listen, this must result in government action. It is only governments which can now stop this piracy. Government must take action.”

He said that satellite operators cannot be the decision maker on this level of piracy. “Our support will continue, but beIN is suffering very badly from piracy, as are the content providers with the major sports rights holders being badly affected. Most of the international organisations try to be diplomatic, and neutral. They do not want to be seen as taking sides, so in my view the likes of the ITU will not get very far. But there has to be enforcement, and punishment by way of fines.”

Qatar’s second satellite, Es’hail-2 is now in orbit and likely to come into service within the next week or so.

FIFA, UEFA and other key sporting bodies are firmly backing the Qataris in their attempt to get the pirates closed down.  A joint statement last week by FIFA, UEFA and the Asian Football Confederation plus the English Premier League, German Bundesliga and Spanish football league denounces “persistent and illegal screening” of soccer games where Qatar’s beIN Sports owns the Middle East rights.

Meanwhile, and not helping the diplomatic tensions between Saudi Arabia and Qatar, the Saudis are  moving ahead with a much criticised trial against beIN Sport-owned Al-Oula and three named Qatari defendants who are employees of the channel, Yousef Mohammed Hassan Al-Obeidli, Tarek Darwish Ali Zainal, and Muhammad Abdul Aziz Abdullah Al-Subaie.

The Saudi Specialised Criminal Court is set to hear the allegations against the three Qataris on February 25th despite the three having fled the country.