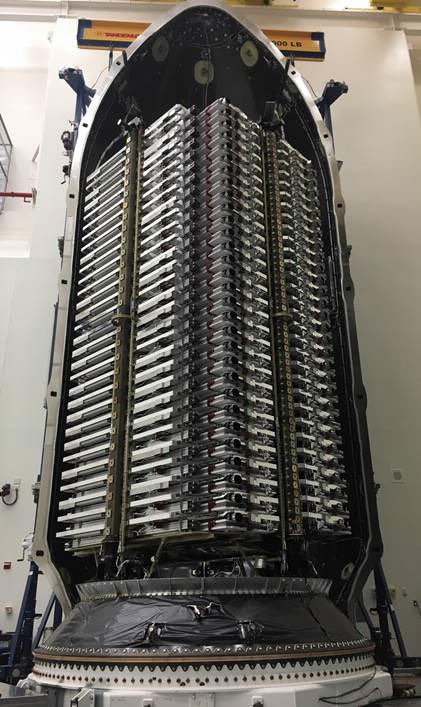 Elon Musk tweeted pictures on May 11th of his first batch of ‘Starlink’ satellites squeezed into its rocket’s fairing ahead of a planned launch on Tuesday or Wednesday, depending on conditions.

Musk admitted they were a “tight fit” which is something of an understatement. Musk said that there were plenty of things which could go wrong on this first mission launch, and added that 6 more launches of 60 each time were needed for “minor” global coverage, and that 12 launches would deliver “moderate” global coverage.

The Falcon 9 rocket, and its fairings, are the same as that used to launch Musk’s tesla roadster into space more than a year ago.

Each satellite has been described as a relatively thin rectangle and ‘flat packed’ into the fairing. Each weighs an estimated 200-300 kgs

The Starlink ambitions are considerable. In total Musk has received permissions to launch almost 12,000 satellites into space.