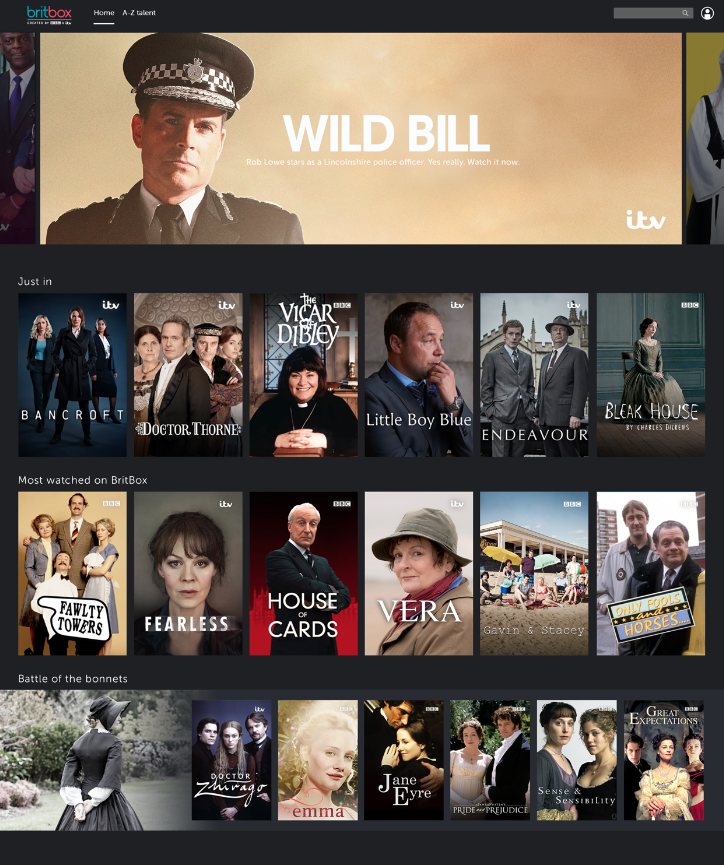 BritBox, the SVoD service created by UK PSBs the BBC and ITV, has opened for business, bringing what it describes as the greatest collection of British boxsets with the finest homegrown talent to viewers for £5.99 (€6.95) a month in HD and across multiple devices.

BritBox has signed a partnership deal with fellow PSB Channel 4 for British TV boxsets from All 4 and British films from Film4. The three-year deal will see 1000+ hours from All 4 – with a range of comedy, drama and non-scripted programmes from across the service, including new series – and for the first time to any streamer, an exclusive Film4 curated service featuring iconic British films. BritBox will bring All 4 to the service in Spring 2020, with new series being available 31 days following transmission of the last episode on Channel 4. Film4 will follow later in 2020.

“Channel 4 has always showcased distinctive and diverse British content and, in a world of almost unlimited choice, our public service brand values are more important than ever for viewers,” stated Alex Mahon, CEO at Channel 4. “The opportunity to collaborate as PSBs on BritBox extends our track record of partnership and will ensure there is a compelling single destination for the very best high quality, home-grown content.”

Multiplay telco BT is partnering with BritBox to create a range of products and offers that feature access to BritBox for millions of customers across its brands and services, and as part of the deal EE will be the exclusive mobile partner for BritBox. BT and EE will share more information about the products, services and marketing that will include BritBox in the coming months.

“We’re delighted to be partnering with the world’s best streaming providers to give our customers the UK’s best TV experience – offering unrivalled choice and flexibility,” declared Marc Allera, CEO of BT’s consumer division. “This deal with BritBox will add more exciting content to our great range of TV services for customers whether they’re watching at home or on the go.”

Samsung will be the first TV to launch the BritBox app and together, Samsung and BritBox have agreed a co-marketing partnership that will see BritBox featured as a ‘Recommended App’ on Samsung Smart TV’s and joint marketing activity taking place in Q4 as the TV device market heads into its key sales season around Black Friday and Christmas.

“We have an ongoing commitment to provide the greatest experience to our customers, including offering the best range of apps currently available,” commented Guy Kinnell, Vice President of TV & AV Samsung Electronics UK. “BritBox provides a new way to access the best of British content exactly whenever they want which consumers can experience on Samsung before any other Smart TV platform.”

“BritBox is all about bringing together the best of British creativity and talent in a new digital world,” explained Reemah Sakaan, Group Director ITV SVOD. “Today’s launch and announcement of our partnership deals with Channel 4 and BT underline the quality and scale we want the service to embody. It’s wonderful to be bringing such a wealth of brilliant British TV and film to subscribers from today, and I’m looking forward to revealing our exciting, original commissions in the near future.”

Commenting on the launch, Steve Miller-Jones, VP Product Strategy at Limelight, said: “We welcome a true British front opening up in the streaming wars. As we had said before, the British appetite for streaming is healthy right now. Our recent State of Online Video report (2019) confirmed subscription video on demand is on the rise in the UK. In 2018, 27 per cent of people subscribed to two or more SVoD services; in 2019, that figure is now standing at 41 per cent.  Pricing of the new service looks right too but it will be critical to maintain this when the number one reason for why UK consumers have cancelled their streaming services (55 per cent) is price hikes.”

“Of course, great content is king but quality of experience is vital too. More than one in two British viewers call out video rebuffering as the most frustrating aspect of watching video online, with 60 per cent abandoning a video if it rebuffers as many as two times. Britbox’s backers have big brand profiles and loyalty but seamless content delivery at broadcast quality will be crucial to the new service’s success especially as it fights for subscriptions with the bigger players,” concluded Miller-Jones.