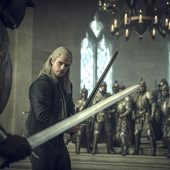 Netflix added 8.76 million paid global subscribers in the three months to December 31st 2019 – its first quarter up against the Disney+ streaming service.

The streaming admitted that increased competition would continue to affect its US business – not just from Disney, Amazon and Apple but also soon-to-launch services from Warner and NBCU/Comcast – where subscriber growth of 420,000 was below expectations.

Netflix finished 2019 with more than 167 million paying customers globally, ahead of expectations. The company said it was boosted by releases that including a new season of royal drama The Crown and fantasy show The Witcher (pictured).

Netflix expects to add 7 million subscribers globally during the first quarter of 2020 and said: “We have a big headstart in streaming and will work to build on that by focusing on the same thing we have focused on for the past 22 years – pleasing members.”

Commenting on the results, industry analyst Paolo Pescatore of PP Foresight said: “This was a good end to a rollercoaster year [for Netflix]. It had a record first quarter in 2019 in terms of net additions and then missed out on its own targets for the next two quarters. The road ahead will get bumpy for sure. Worryingly, the company is burning through a lot of cash. It needs to recoup this by adding customers more quickly, increasing prices or taking on more debt. Therefore, expect price rises in all key markets during 2020.”

“There’s a fine juggling act by raising revenue through price increases vs. retaining subscribers. This could backfire as many of the new and forthcoming video streaming services are cheaper than Netflix. This makes Netflix vulnerable in its home market where it stands to lose out, quite considerably as underlined by these latest results. While Netflix has set the benchmark quite high, it is no longer the only player in town. Disney’s recent foray underlines consumer appetite to sign up for other services. However, there will be too many services chasing too few dollars. All are fighting for viewers attention and their money.”

Netflix has a huge head start and remains in pole position given its broad content catalogue and extensive relationships with telcos and pay TV providers. It should be able to weather the streaming battles over the short to medium term. All the future subscriber growth will come from its overseas operations. EMEA is and will continue to be a key region of growth for coming quarters,” concluded Pescatore.

“This is the first quarter where Netflix has started to feel the heat from competitors,” noted Luke Bozeat, Chief Operating Officer, MediaCom UK. “The streaming giant not only needs to contend with established players like Sky’s NOW TV and Amazon Prime but also new players like Disney+, BritBox, Apple TV+ and Peacock.

“Netflix may have been the first to break into the streaming market, but others are catching up and cracks are starting to show. While the company has famously said it will never introduce advertising to fund its business model, the reality is that producing award-winning and attention-grabbing shows require deep pockets. And this is something that subscriptions alone may be unable to fill; and consumers are forced with either paying a sizeable sum to access each company’s sizeable content library, or choosing a handful of streaming services that they’re willing to invest in.”