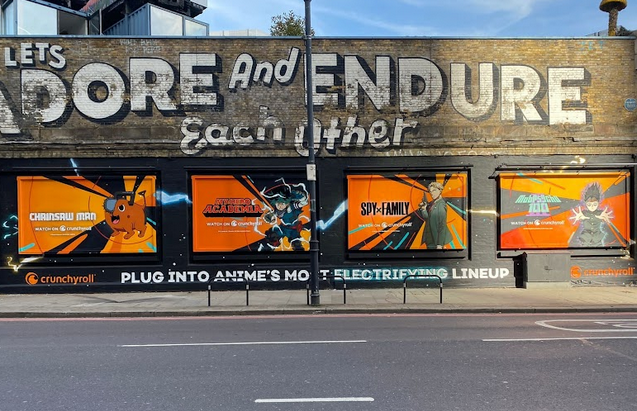 Crunchyroll, the global anime brand, is celebrating its autumn Supercharged line-up of anime with a mural, hand-painted onto a wall in London’s Shoreditch.

Global Street Art Agency, the UK’s leading hand-painted advertising agency, executed the colourful 20m x 4m anime-themed mural on the Adore & Endure wall,  on the side of the legendary Village Underground, which faces Great Eastern Street. The Adore & Endure wall has been a permanent fixture in the area since it was painted in 2010.

The vibrant mural, which features Crunchyroll’s trademark orange set against a black background, is expected to be an Instagram favourite with anime and street art fans, tourists and passers-by. The mural has already started turning heads and will remain in place until November 20th 2022.

The anime series featured in the mural are Chainsaw Man, to My Hero Academia, Spy x Family and Mob Psycho 100, which are all part of the new Supercharged autumn season..

The autumn slate celebrations will continue at Comic-Con, London from October 28th – 30th where Crunchyroll are planning to screen episodes of Chainsaw Man, Blue Lock, Spy x Family. The event, which attracts up to 150,000, is one of the biggest fan gatherings.

Friday October 28th from 1.20pm through to 3.20pm the following will be shown on the main stage (no booking required)  in this order: