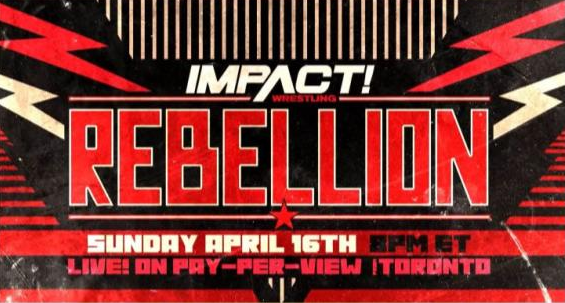 For the first time in 4 years, IMPACT Wrestling presents live pro wrestling action in Toronto, Canada, as the 5th annual REBELLION pay-per-view will originate from the Rebel Entertainment Complex on April 16th.

Then, on April 17th, fans can watch the REBELLION FALLOUT SHOW, also live from the Rebel Entertainment Complex, for a second night of action-packed pro wrestling.

Toronto was the site for the first-ever REBELLION pay-per-view in 2019, when the main event saw The Latin American Xchange (Santana and Ortiz, with Konnan) defeat The Lucha Bros (Fénix and Pentagón Jr) to win the World Tag Team Championships for the fourth time.

IMPACT’s television trucks will be in Toronto on April 17th to capture all of the in-ring action for upcoming episodes of IMPACT’s flagship weekly TV show (Thursday, 8pm EST on AXS TV in the US, Fight Network in Canada and Impact Insiders on YouTube.)

IMPACT Wrestling has a rich history in Toronto, as the city had an IMPACT show in 2011 and multiple in 2018, including the prestigious SLAMMIVERSARY pay-per-view.

Tickets for the 2023 REBELLION pay-per-view and the REBELLION FALLOUT SHOW go on-sale on January 20th.