The FA Cup final has been rescheduled for August 1st as the disrupted domestic football calendar begins to take on a new shape.

Following news that the Premier League will resume on June 17th (subject to Government clearance), the Football Association (FA) has now announced its dates for the final three rounds of the FA Cup, with the quarter-finals played over the weekend of June 27th and 28th, and the semi-finals then played on July 11th and 12th. All games will be televised. 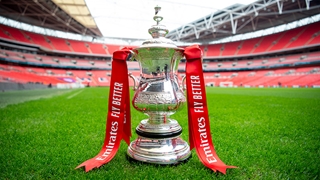 There are currently no details on where the quarter-final matches will be played, but the intention is for the semi-finals and the final to be played at Wembley Stadium – as usual – presumably behind closed doors.

The quarter finals matches are:
Sheffield United vs Arsenal
Leicester vs Chelsea
Norwich vs Manchester United
Newcastle vs Manchester City

FA chief executive Mark Bullingham said the dates are “dependent on all safety measures being met” with venues and kick-off times yet to be confirmed. He added: “The health and wellbeing of players, staff and supporters remains our priority. The competition has been an integral part of the English football calendar for nearly 150 years, and we would like to thank the Premier League executive and clubs for their support in scheduling the remaining matches during this unprecedented time.”

The UK broadcast rights for the competition are currently shared by BT Sport and BBC.