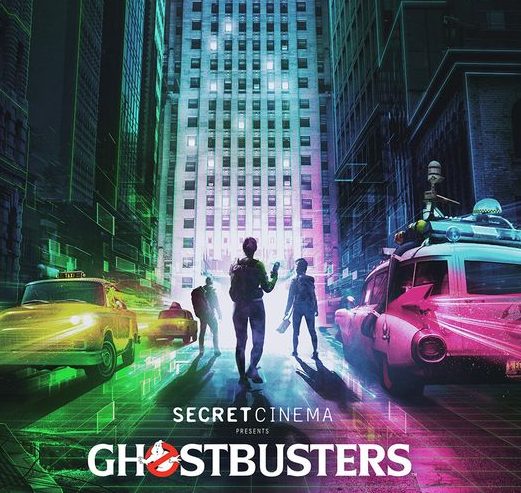 In the lead up to the theatrical release on November 19th for the anticipated next film in the franchise, Ghostbusters: Afterlife, Secret Cinema has announced Ghostbusters: The Gates of Gozer, an innovative virtual live experience based on the supernatural world of Ghostbusters in collaboration with Sony Pictures.

Set one year after Ghostbusters (1984), which was written by Dan Aykroyd and Harold Ramis and directed by Ivan Reitman, as the Ghostbusters’ bask in their victory at the Ivo Shandor building, fans will be able to enroll as a new enthusiastic generation of students at the Paranormal Institute, partaking in the missing chapter of the Ghostbusters legend. The Ghostbusters will be on hand to quickly train up and recruit more people following their finest hour, so they can pass on their experience and expertise in battling ghosts.

The experience will fuse together technical features and special effects with live actor interactions to create an immersive experience. Fans will train with the best as they embark on a journey of paranormal knowledge and are put to the ultimate test in a world featuring mesmeric visual effects, including face filters and voice modulators alongside spooky binaural sound.

People will enroll to explore the haunted realms of New York in teams of six and they will have the chance to meet new and familiar faces during the show while they get trained in key skills including parapsychology, and science and technology. Once in live paranormal scenarios students must use quick wits, live improvisation, and a range of gadgets to hunt the trickiest or most malevolent of spooks as they work their way through the experience.

“This online experience allows us to combine all the elements people have come to know and love from Secret Cinema, but now for the first time in a fully immersive virtual setting. We know Ghostbusters fans across the world will embrace the spirit of the show and arrive ready to immerse themselves in the story, costumes and all,” said Max Alexander, CEO of Secret Cinema. “Now the only question is: Who ya gonna call to be part of your team?”

“We are thrilled to be collaborating with the team behind Secret Cinema, who are renowned for creating innovative immersive experiences that allow audiences to experience their favorite films and TV shows in a brand-new way. ” said Jeffrey Godsick, EVP of Global Partnerships and Brand Management and Head of Location Based Entertainment at Sony Pictures Entertainment said. “Ghostbusters has been entertaining audiences for almost four decades and Ghostbusters: The Gates of Gozer will allow fans to engage with some of the much-loved characters and storylines in a way they have never before.”

“Secret Cinema dreamed of creating an online interactive game for people who would never normally want to play online games.” said Matthew Bennett, Group Creative Director of Secret Cinema. “It’s a radical new approach to live digital storytelling that features multiple locations thriving with numerous outcomes all powered by a host of living characters, both new and old. We call on all fans to sign up to the Ghostbusters new Paranormal Institute so that they can be thrown into the heart of this missing chapter. Only in Secret Cinema’s virtual world can they use their skills, knowledge, bodily movements, voice and curiosity to unlock a parallel dimension of Ghostbusting action.”