The BBC has achieved the highest ever global audience, according to the Global Audience Measure (GAM), which records the total weekly number of adults accessing the BBC around the world.

In 2020/21, the BBC achieved record figures with an average audience of 489 million adults every week, an increase of over twenty million from the previous year.

This brings the BBC’s global audience close to the 500m people target for 2022, which the BBC is on track to exceed in its 100th anniversary year. The BBC’s audience has more than doubled in the last ten years.

Tim Davie, BBC Director-General, commented: “I am delighted that the BBC now informs, educates and entertains more people around the world than ever before. Our global reach continues to grow and we are well on target to hit half a billion people by our centenary next year. The fact that our audience has more than doubled in the last decade shows how trusted and increasingly valued BBC services are right around the world. It also highlights the important role we play for Britain on the global stage in carrying the UK’s voice, democratic values and influence.”

Liliane Landor, Senior Controller of BBC News International Services and Director of BBC World Service, says: “Global audiences for BBC News have reached record levels and our reputation for providing trusted, impartial news and information is world class. We have seen how vital our output has been to audiences in moments of jeopardy, from the Covid-19 pandemic to elections and conflicts. The BBC has strengthened its position in markets of need such as Iran, Afghanistan, Myanmar and the Democratic Republic of Congo, where access to trusted impartial news is paramount. We will continue to provide strong first-class journalism across our platforms.”

The BBC World Service, which includes language services and World Service English, has continued to be a key growth driver, and still accounts for the largest share of BBC’s global reach. Weekly audience reach for the World Service now stands at 364 million, and is up 13 million from 2019/20.

Ongoing government investment in the World Service – in particular to boost digital, tackle disinformation and reach new audiences in India, Africa and the Middle East – has enabled BBC News to play a critical role in helping people across the globe safely navigate the Covid-19 pandemic.

Audiences turning to the BBC during the Covid-19 pandemic have led to an increased demand for trusted news online. This has positively affected digital reach and the growth of the BBC’s owned sites, such as World Service languages sites and BBC.com. 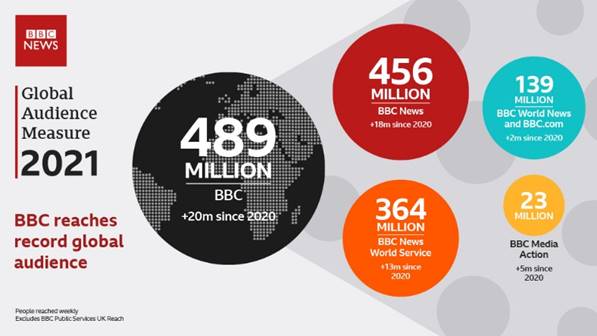 This year’s global performance was driven by the following factors:

The top 10 countries by BBC News audience are: