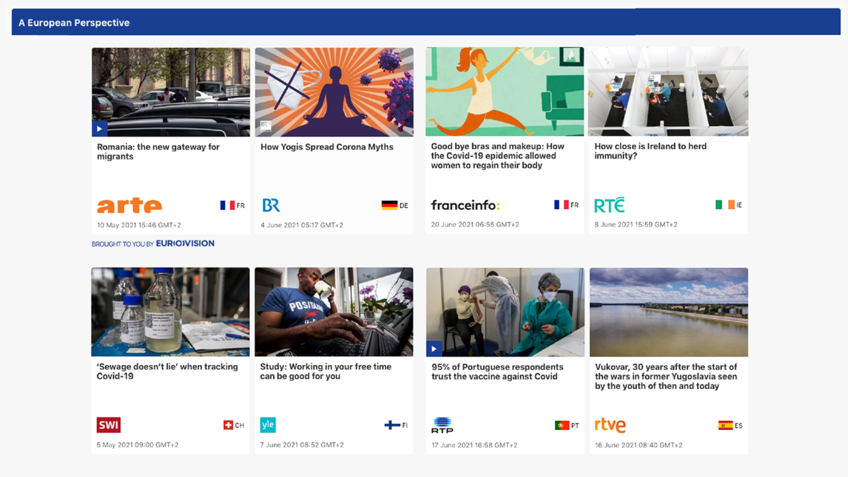 At a time when the need for mutual understanding in Europe has never been so great, EBU-led digital news service ‘A European Perspective’ is stepping up its efforts to offer citizens multilingual coverage of major stories by drawing on content produced by 12 public service newsrooms.

Following its highly-successful launch in 2022, the content offer has broken new ground in using automated translation software and AI-driven recommendation tools better to serve audiences who are increasingly turning to trustworthy information from national broadcasters.

Over the next phase of this initiative, the cohort of contributing media is poised to welcome new members as well as to enact a social media strategy aimed at reaching young people and to develop a content-based algorithm that embraces public service values.

Phase I of ‘A European Perspective’ launched in July 2021 – brought together 11 public service broadcasters and the EBU to share objective, trustworthy news from across the continent, all delivered in real-time to the public in their local language online. In the first eight months of the project, over 6,500 stories were shared on their websites. With over 45 million views, the public’s interest is clear. Broadcasters are able to display a dedicated newsfeed on their homepages or within any article, serving the growing need for a European perspective on public service news coverage.

Phase II of the project will expand upon this success and further develop the innovative work started around online news sharing for another 14 months.  A new social media strategy is set to increase public engagement and reach new, younger audiences and it will also kickstart the development of a public service journalism algorithm. Both phases of this innovation project are co-financed by the European Commission.

“Viewers struggle to know who to trust when watching the news,” stated Delphine Ernotte-Cunci, President of the EBU and CEO of France Télévisions. “Our goal is to establish a networked pan-European newsroom based on public service values and high standards of journalism.”

“A European Perspective brings a variety of perspectives on both local stories and global headlines. With Russia’s invasion of Ukraine, we saw how connected reporting throughout Europe, in real time and translated into the local language, helped the public gain a more informed view on what was happening. That is why this project is a game changer.”

“Making sense of the world has never been more important,” declared Jon Williams, Managing Director of RTÉ News & Current Affairs. “And that starts in our own back yard. Post-Brexit, a ‘European Perspective’ has increased the range and variety of our storytelling for Irish audiences – it has also meant RTÉ’s stories about Ireland have been consumed by different audiences right across Europe.”

“As we double our presence around the world, and are awarded the JTI mark – Europe’s standard for trusted journalism —  A ‘European Perspective is one more way we can help our audiences understand context and put the pieces of the jigsaw together in an ever more complex and turbulent world.”

A European Perspective builds on systems used by the Eurovision News Monitoring Tool to share viewpoints from across Europe in a seamless and user-friendly fashion. The EBU PEACH recommendation system uses algorithms to surface relevant articles while the EBU’s AI-assisted EuroVOX application provides automated translation.

Together, these tools are helping to overcome language and cultural barriers, making an important contribution to society and democracy. Phase II of the project will see these applications refined and developed to further facilitate the sharing of news.

New partners are set to join the initiative and the potential for forging distribution partnerships with institutions that share a public service mentality – such as cultural organisations, libraries, think-tanks and universities – will be explored. Journalism schools will also be invited to take part in a series of PSM News Innovation Labs. All contributing to the creation of a European public sphere.

The initiative will also benefit from new editorial contributions that will strengthen the brand and broaden its appeal including: