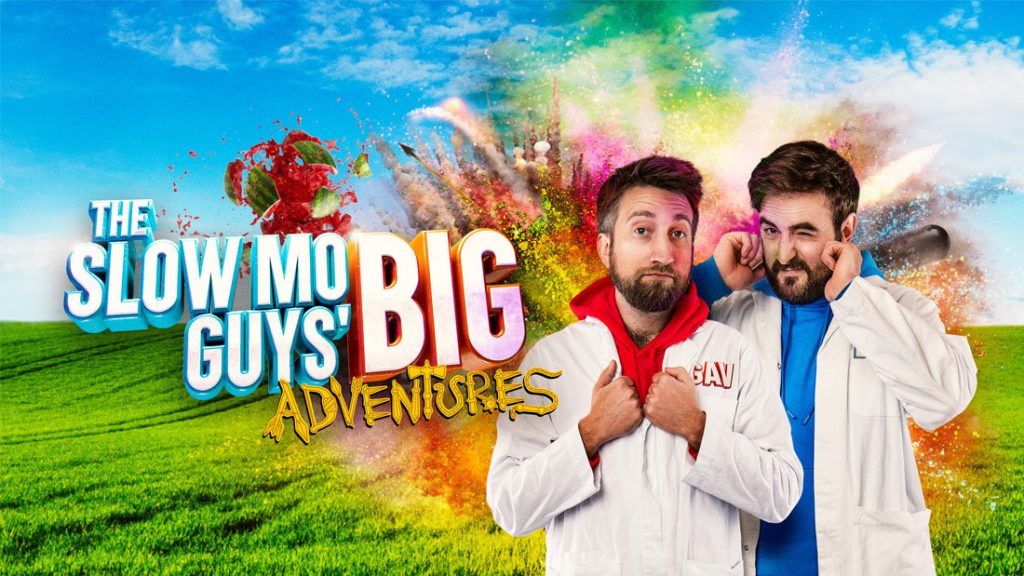 Sky Kids has announced a new original show, The Slow Mo Guys’ Big Adventures, debuting on September 1st with the goal to get kids inspired by science and history.

Presented by YouTube stars with over a 14.3million subscribers, the (10×22) series sees The Slow Mo Guys (Gav and Dan) set out to uncover mysteries from the past and recreate some of history’s most explosive moments. With each episode taking on a different theme, kids will experience bold adventures with Vikings, space rockets, the Wild West, and a whole lot more.

The show will take viewers on a time travel adventure, with historical animations written by the creator of Horrible Histories, Terry Deary, setting the scene for exhilarating experiments filmed in slow motion. Kids will also have the chance to access tutorials to join in the fun and try out their very own experiments at home, all whilst finding out fun facts along the way.

Also launching on August 26th, ahead of the new school year, is MC Grammar’s Wonder Raps, which returns for a (10×5) second season of new rap videos.

Following the success of the first season and MC Grammar’s World Book Day song which drove over 1.3million views, the new show combines key stage 2 subjects with cool tunes and sets out to teach children about topics including The Tudors, oceans, and healthy eating. MC Grammar’s Wonder Raps is produced by Monkey. David Granger is Executive Producer for Monkey and Nick Withers is Series Producer.

Lucy Murphy, Director of Sky Kids, said:“To help kids get excited about learning and feel prepared for the start of term time, we’ve commissioned two new shows for families to enjoy together, bringing learning and entertainment to screens with some of the biggest name’s kids know and love”.

Jacob Mitchell, AKA MC Grammar, said: “I can’t wait for everyone to see what the second series of Wonder Raps has in store. I always have a lot of fun creating and making the songs. I hope they continue to entertain, inspire and empower the young minds that tune in!”

Gabe Turner, Executive Producer and Partner at Fulwell 73, said: “We are hugely excited for people to see what brilliant adventures The Slow Mo Guys have been up to in their first TV series. We’ve loved being a part of their journey and hope audiences will enjoy this fascinating and fun exploration of science and history.

David Granger, Executive Producer and Creative Director for Monkey, said: “We’re so proud of our new series of Wonder Raps and its ability to transport viewers to amazing places, where they will have the best fun learning thanks to brilliant visuals and banging tunes that will have everyone singing along.”