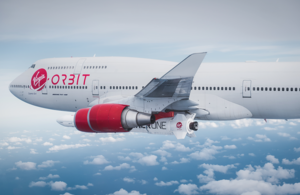 Following our report on the progress of first satellite launch from UK soil, UK government ministers and industry executives have welcomed the upcoming Virgin Orbit mission and its benefits.

Virgin Orbit’s carrier aircraft, ground support equipment, and rocket set to arrive in Cornwall this week. Made possible by funding from the UK Space Agency, the mission, which is on track for a November launch from Spaceport Cornwall, has been named ‘Start Me Up’ in tribute to the iconic British band, the Rolling Stones.

Spaceport Cornwall is at the heart of a growing aerospace and space cluster and expects to create 150 jobs in the local area.

“As we move ever closer to the first satellite launch from UK soil, it’s excellent to see the progress being made by Virgin Orbit, Spaceport Cornwall and those across government in delivering this historic mission, the first of its kind in Europe,” commented Science Minister Nusrat Ghani.

“With 47,000 jobs across the UK, our growing space industry is a vital part of the economy and has an important role to play in catalysing investment, generating growth and prosperity. I’m looking forward to working with this innovative sector and delivering on our National Space Strategy,” she added.

The flight manifest includes payloads from seven customers, based in the UK and internationally, with companies from England, Scotland and Wales involved in their development and manufacture.

These satellites will demonstrate advanced technologies, with applications ranging from in-space manufacturing of specialist materials, space weather research and satellite positioning, to the prevention of illegal trafficking and smuggling.

“Seeing Virgin Orbit’s aircraft take off is an exciting reminder that we are close to the first launch from UK soil and first launch of a satellite from Europe,” said Ian Annett, Deputy CEO at the UK Space Agency. “This will be an iconic moment in the history of UK space endeavours, so it is fitting that the mission has been named after a song from the Rolling Stones, one of the UK’s most iconic bands.”

“Developing new launch capabilities will build on the strengths of our space sector and attract companies from around the world to benefit from these commercial opportunities. This will catalyse investment, bring new jobs to communities and organisations right across the UK, as well as inspiring the next generation of space scientists and engineers,” he suggested.

The UK Government’s National Space Strategy sets out how the UK will become the first country in Europe to launch satellites into orbit in 2022 and build a sustainable, commercial launch market. Spaceport Cornwall is one of seven spaceport sites being developed across the UK which will help unleash a wave of innovation and create hundreds of new jobs across the country.

“What an incredible honour it is for us to be part of something as monumental as bringing Britain into the business of launch. Working with our partners across the UK government, we’re starting up a new capability that will serve the people, the economy, and the security of the UK,” stated Dan Hart, CEO of Virgin Orbit.

“It’s time to Start Us Up,” declared Melissa Thorpe, Head of Spaceport Cornwall. “This is a huge moment for us all in Cornwall as the journey to UK space launch has officially begun. The mission name and patch reflect and embrace the incredible partnerships between our two countries and teams.”

The first launch from Spaceport Cornwall is just the beginning, with vertical launch spaceports in Scotland expected to come online in 2023. All UK launches are subject to receiving a licence from the Civil Aviation Authority.