This year’s Super Bowl broke streaming records (up 20 per cent on 2018) but not all viewers had a true live experience. Real-time streaming solution, Phenix, measured the game’s latency and found that “live streams” were anywhere from 28 to 47 seconds behind real-time.

In addition to the delays from field to device, Phenix also measured the latency between devices watching live-streams on the same apps and found that devices had delays ranging from 69 to over 100 seconds apart from each other. 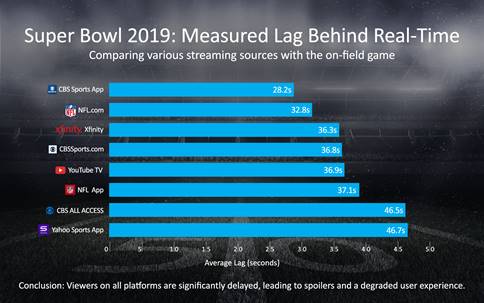 Phenix CMO (and formerly of the NFL), Jed Corenthal, commented: “The Super Bowl is the most-watched US sporting event of the year, and as sports consumption habits shift from linear broadcast to live-streams, it’s important to understand the viewing experience of this growing cord-cutter demographic. Phenix had a tester on-site at Mercedes-Benz Stadium and we measured the lag behind the action on the field to cable and over the air broadcast and to various streaming platforms such as CBSSports.com, the CBS Sports app, the Yahoo Sports app and NFL.com; results showed delays ranging from 28 seconds to nearly 47 seconds behind real-time. Further, when comparing lag time for different viewers watching on the same platform, it showed they’re extremely out of sync, with delays ranging from 69 seconds to over 100 seconds apart from each other.”

“Latency is infuriating for fans, leaving them to learn about touchdowns from their Twitter feeds and push notifications before they see the play on the screen. While frustrating, they’re not unexpected – 72 per cent of sports viewers anticipate issues when streaming games. It goes beyond just an annoyance and causes a major domino effect, damaging the reputation of the streaming platforms to impacting revenues when people don’t want to pay for under-performing subscriptions to brands choosing to pull away and advertise on functional platforms that have the most eyeballs. In addition, as legalised betting continues to take hold, anything but a real-time streaming experience is impossible when there’s money at stake. As we look to media rights conversations happening over the next couple of years, the industry needs to redefine its standards of what an acceptable live-content viewing experience is in order to move forward successfully. Super Bowl LIII’s streaming results are just another proof point that platforms can’t deliver an optimal user experience for large-scale events and we need a technological overhaul to fix it,” he concluded