The parents of Pooq and Oksusu have decided to combine services in order to consolidate content and resources. The services signed a memorandum of understanding in January 2019, but as of July 2019, the service has yet to launch. The new service is being promoted as an open platform that will seek content and investment from outside sources. It will target the South Korean market and also expand throughout Asia.

Amazon’s Prime Video continues to hold little sway in South Korea. Its parent has not developed a robust e-commerce infrastructure that would offer synergies with the video platform. Currently, there is not a dedicated South Korea Amazon website nor a Prime subscription available for the country. Prime Video lacks local original content to drive subscribership on its own. Amazon will continue to struggle until these factors are addressed.

Unlike most Asia-Pacific markets, Netflix is reasonably priced among its OTT peers in South Korea. Earlier in 2019, Netflix trialled a mobile-only subscription available for approximately 6,500 South Korean won per month. The trial has ended and there is no indication the plan will be revisited.

Kagan estimates a reduced-price, mobile-only tier would result in cannibalisation in the Korean market. This strategy is better suited for markets like India, where the lower-priced tier attracts those who cannot afford a full-priced tier yet does not hold enough relative value for those who can afford the more expensive tier to switch to the cheaper one. 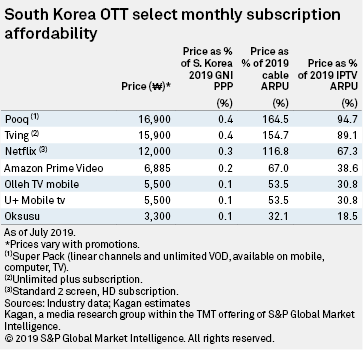