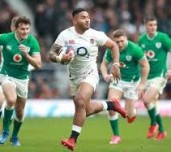 Amazon has announced that, this November and December, live international Rugby Union will be coming to Prime Video in the UK for a new tournament – the Autumn Nations Cup.

The Autumn Nations Cup will be the first competitive Autumn international tournament and the first full tournament after a six month break for international rugby. The tournament will be played across four weekends of games featuring the Six Nations, namely England, Scotland, Wales, Ireland, France and Italy and two guest teams: Georgia and Fiji.

Every game, apart from Ireland’s three pool matches, which will be shown live on Channel 4, will be available exclusively on Prime Video in the UK. Prime Video will also co-broadcast the England v Ireland fixture, played at Twickenham alongside Channel 4.  The games will run from November 13th until December 6th and be fronted by Gabby Logan, Bryan Habana and other top class rugby names who will deliver the on screen action to fans.

In addition to three live matches, Channel 4 will broadcast highlights from all the rounds of the eight-team tournament after agreeing a deal with Amazon.

The tournament starts as a round-robin format featuring two groups, each containing three of the Six Nations teams and one guest team, concluding with a knock-out finals weekend.

“We are excited and privileged to work with Six Nations Rugby and the eight participating unions in to bring this new tournament to viewers across the UK on Prime Video,” said Alex Green, MD Prime Video Sport Europe.  “It is a unique event bringing a new level of competitiveness to Autumn international rugby and will offer something back to all the fans who have missed top-level rugby.  We will be offering mouth-watering clashes featuring the top international teams in the Northern Hemisphere exclusively to UK Prime members at no additional charge to their membership.”

Channel 4’s Head of Sport, Pete Andrews, said: “We’re delighted to have teamed up with Amazon to bring rugby fans this fantastic tournament. It’s thrilling to be offering first class live international rugby on Channel 4 and it’s great to be launching the tournament live on a Friday night with Ireland v Wales. The England Ireland match-up the following week is a mouth-watering prospect live on Channel 4.”

Ben Morel, CEO Six Nations Rugby, added: “We are delighted to welcome Amazon Prime Video on board as a broadcast partner for the Autumn Nations Cup, and to have such a major global player demonstrate their commitment to rugby is a tremendous endorsement for our game. Amazon Prime Video has already established a reputation for delivering high level production in live sport which we have seen through their coverage of the Premier League, ATP and WTA Tennis, and NFL. We are hugely excited by their initial plans for the Autumn Nations Cup and are confident rugby lovers will thoroughly enjoy the coverage.”