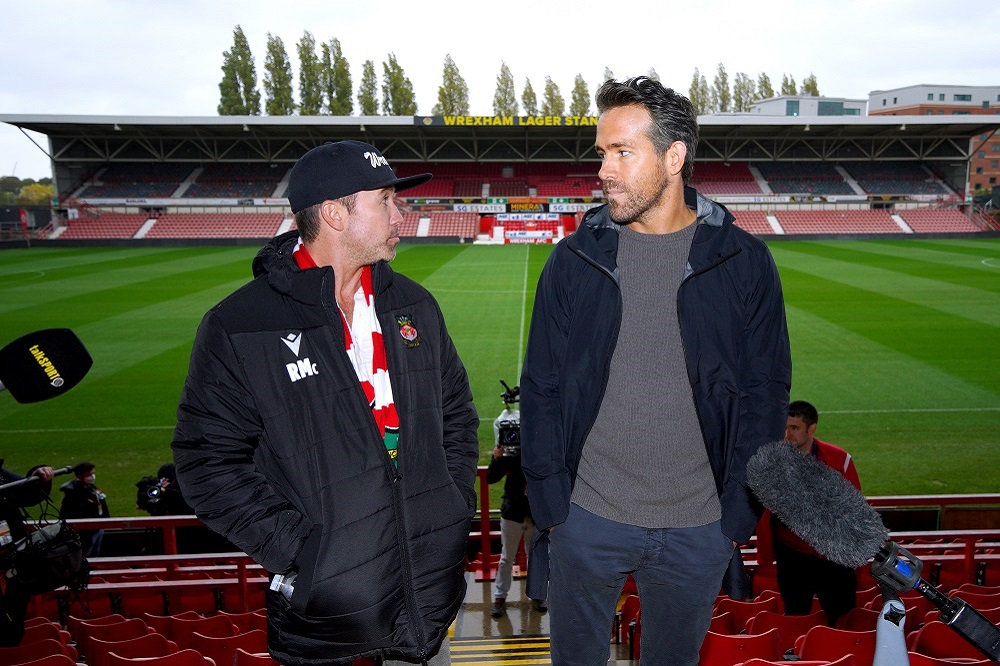 Disney+ has announced raft of new titles set to premiere exclusively on the service in the UK & Ireland in 2022-23 including the psychological thriller The Patient starring Steve Carell and Domhnall Gleeson, Fleishman is in Trouble starring Jesse Eisenberg, Lizzy Caplan, Claire Danes, and Adam Brody; and Welcome to Chippendales starring Kumail Nanjiani.

The much anticipated Welcome to Wrexham, Rob McElhenney and Ryan Reynolds’ football docuseries, will arrive on Disney+ on August 25th with more exclusive series premiering over the next 12 months including Mike from the team behind hit movie I, Tonya, The Old Man starring Jeff Bridges and John Lithgow, and Limitless with Chris Hemsworth. Also joining the line-up over the next 12 months are UK originals including Wedding Season, Extraordinary, and docuseries Save Our Squad. Plus, new seasons of American Horror Stories (Season 2) and Reservation Dogs (Season 2) are coming soon.

Welcome to Wrexham is a docuseries tracking the dreams and people of Wrexham as two Hollywood stars (Rob McElhenney and Reynolds) take ownership of the town’s historic yet struggling football club.

New drama series The Old Man will land exclusively on Disney+ in autumn. Based on the bestselling novel of the same name by Thomas Perry, The Old Man  centres on Dan Chase (Bridges), who absconded from the CIA decades ago and has been living off the grid since. When an assassin arrives and tries to take Chase out, the old operative learns that to ensure his future, he now must reconcile his past.

Joining Disney+ from FX is Fleishman is in Troubleadapted by Taffy Brodesser-Akner from her New York Times bestselling novel of the same name. Disney+ will also be the home of the psychological thriller The Patient, about a therapist, Alan Strauss (Carell), who is held prisoner by a patient, and Sam Fortner (Gleeson), who reveals himself to be a serial killer. The show is co-written by Executive Producers Joel Fields and Joe Weisberg (The Americans).

Also joining Disney+ is the adult animation Little Demon starring Aubrey Plaza as the voice of Laura, who, after being impregnated by Satan (voiced by Danny DeVito), is attempting to live an ordinary life in Delaware with her Antichrist daughter but is constantly thwarted by monstrous forces.

A diverse range of titles will premiere on Disney+ in the coming months including the limited series Mike from showrunner Karin Gist. Produced by 20th Television, a part of Disney Television Studios, the show tells the story of the dynamic and controversial life of boxing icon Mike Tyson, starring Trevante Rhodes.

Co-created by Justin Roiland (Rick and Morty) and Mike McMahan (Rick and Morty, Star Trek: Lower Decks), the third season of Solar Oppositesis on its way to Disney+ on July 13th and centres on a team of four aliens who are evenly split on whether Earth is awful or awesome.

Newseries and documentaries from National Geographic include the aforementioned Limitless with Chris Hemsworth, Dance the World with Derek Hough, Extraordinary Birder with Christian Cooper, and Farming is Life with Indy Srinath. Plus, the new docuseries Science Fair: The Series, based on the Sundance Festival favourite and SXSW Audience Award-winning documentary, follows the agony and ecstasy of the beloved and brainy teenage subculture of competitive science.

In the coming months, Disney+ will welcome a number of movies launching exclusively including 20th Century Studios The Princess starring King as a beautiful, strong-willed princess who refuses to wed the cruel sociopath to whom she is betrothed, and is kidnapped and locked in a remote tower of her father’s castle. Searchlight Pictures’ Not Okay is a satire that follows an aimless aspiring writer (Zoey Deutch) who fakes an Instagram-friendly trip to Paris in the hopes of boosting her social media clout but unwittingly falls into a lie bigger than she ever imagined. Plus, 20th Century Studios Prey an all-new entry in the Predator franchise, directed by Dan Trachtenberg (The Boys, 10 Cloverfield Lane).

Also confirmed as coming to Disney+ is Rosaline, a fresh comedic twist on Shakespeare’s Romeo & Juliet, with the classic love story now told from the perspective of Juliet’s cousin Rosaline, who also happens to be Romeo’s recent love interest. The film stars Kaitlyn Dever and is directed by Karen Maine.

Seven UK Original series have been announced as coming to Disney+ for subscribers to enjoy including Wedding Season, a genre-busting action-thriller romance about two people who shouldn’t be together but who can’t stay away from one another, and new comedy Extraordinary from the production company behind Killing Eve, tells the story of Jen, who lives in a world where everyone has a superpower, except her.

Ben Taylor (Sex Education, Catastrophe) joins as director and executive producer for episodes 1 and 2 of the new swashbuckling action and adventure series The Ballad of Renegade Nellfrom BAFTA award-winning writer and executive producer Sally Wainwright (Gentleman Jack, Happy Valley) and David Beckham will feature on Disney+ as he mentors a struggling young grassroots football side, in the docuseries Save Our Squad.

There’s also the darkly funny series Culprits, about the aftermath of a heist, featuring an ensemble cast including Gemma Arterton, Nathan Stewart-Jarrett, Niamh Algar and Eddie Izzard and the epic new action-adventure series, Nautilus, starring Shazad Latif and Richard E. Grant, that will tell the origin story of Jules Verne’s most iconic character, Captain Nemo, and his legendary submarine. The Full Monty will also return as a brand-new limited series from the makers of the original British hit comedy film, almost twenty-five years on.