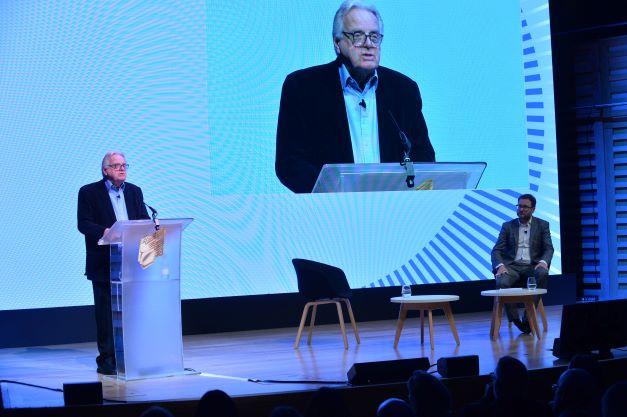 Lord (Michael) Grade, the Chair of UK broadcast regulator Ofcom, has declared that it “will not and should not regulate the culture wars”.

Delivering a keynote speech at RTS London Convention 2022, his first since taking on the role in May 2022, industry veteran Grade noted the role Ofcom would be playing in the implementation of online safety legislation.

“We are gearing up for a huge challenge,” he said, advising that the regulator had been recruiting experienced staff to manage its responsibilities. “This is an urgent task, we’re not waiting for Royal Assent  [of the legislation],” he stated.

“Even if we could regulate every piece of harmful content, we’d only be treating the symptoms of online harm. Parliament correctly wants us to get to the cause, by shining a light on the decisions companies take in designing and operating their services.”

“The Bill lays the burden on platforms to reduce harm. So we want to shift their mindset. We need a new era of accountability, where companies have to prioritise trust and safety alongside clicks and profit. We know that many services take steps to protect their users. But these initiatives have not been sufficient to restore people’s trust and confidence.”

“Over time, big tech firms must shift their regulatory responsibilities from the public policy departments – where they sit today – to the front-line staff responsible for designing and operating their products.”

“At the moment, I see the world of online regulation being accepted and well understood by those whose job it is to worry about such things – namely the policy and strategy teams.”

In terms of its existing role, Grade noted that in 2021, Ofcom assessed more than 11,000 pieces of TV and radio content. “After taking into account freedom of expression, we found only 29 of those broke our rules,”  he advised. “We are not a regulator that intervenes in legitimate debate.”

“When important debates cross the line and are conducted with prejudice or a tone bordering on hateful, we all lose something. When debate is carried out instead with respect and an open mind, we bring people together and find answers that move us forward. I have found that tone is everything. We look to broadcasters for calm forensic analysis and interrogation, not for the shrill and shocking we find on social media.

In terms of the ongoing debate as to the continued relevance of public service broadcasting, he noted that British viewers had a “rich and varied diet”, suggesting that PSBs were “able to do things others cannot, a place where culture meets commerce. “Any proposed changes to the PSB framework must be tested for their potential impact on investment in the creative industries, because these achievements have been a triumph of public policy,” he asserted.