Pacquiao to beam via hologram for FITE press conference 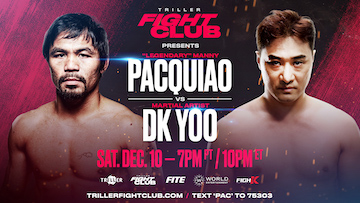 On, October 13th, FITE will use Proto hologram technology to live beam Manny Pacquiao from Seoul to Los Angeles for the press conference with his opponent the Korean MMA star DK Yoo. FITE, the digital sports and entertainment platform owned by Triller, will present the Pacquiao vs Yoo boxing PPV event in December.

The hologram event will mark the first time Proto hologram technology will be used in a combat sports event, allowing Pacquiao to see and hear Yoo and the media, and respond naturally, in real-time, as if he was in the room.

“When you’re presenting a Manny Pacquiao fight you don’t mess around, even when time and distance don’t cooperate,” said Michael Weber, COO of FITE. “Our CMO, Kim Hurwitz, pitched this idea and we loved it. We decided it was time to call on Proto for a high-tech solution to let Manny be literally in two places at once. The PacMan vs DK Yoo fight which will officially be a Triller Fight Club event on FITE, is going to be such an epic match – even its press conference will be making history.”

The press conference will stream live from the Los Angeles studios of Proto. The startup most recently beamed the family of an America’s Got Talent finalist from Seoul to LA, and has been used at the Super Bowl, the NCAA Final Four, the Australian Open and the NBA playoffs. Investors include Albert Pujols, Marshawn Lynch, P. Diddy and Howie Mandel. Other recent users include WWE’s Logan Paul, Usain Bolt, Lewis Hamilton and England Rugby.