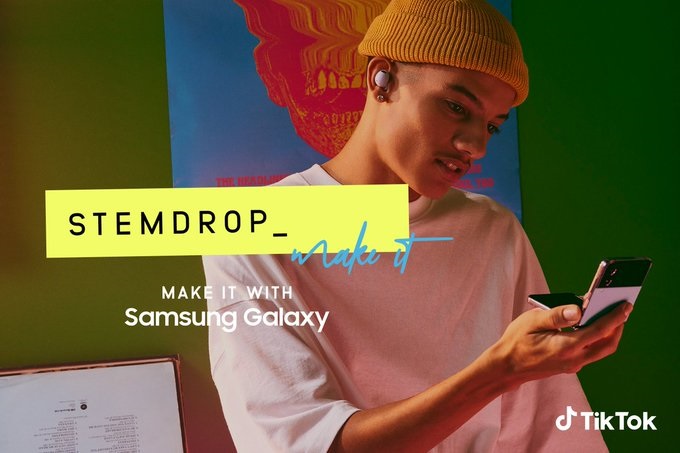 Joining StemDrop for its launch are the hit-making team, Max Martin, Savan Kotecha and Ali Payami. StemDrop will act as an incubator for new talent, artistry, and creativity by giving the opportunity for all artists and music creators, from anywhere in the world, the opportunity to collaborate with some of the best song writing talents.

Made possible by Samsung, there will also be a first of its kind ‘StemDrop Mixer’ on TikTok where creators of all levels can experiment with individual effects, harmonies and melodies to create and upload their own unique version of the song.

Officially launching on October 26th on TikTok, with creative direction from Syco Entertainment and Universal Music Group’s Republic Records and powered by Samsung Galaxy. StemDrop is a never-before-seen platform for artists to showcase their talent to the world.

Max Martin, the prolific producer and songwriter, has produced dozens of the greatest and best-known Billboard number 1 singles over the last two decades, including Britney Spears’ …Baby One More Time, Backstreet Boys’ I Want It That Way, Céline Dion’s That’s the Way It is, Taylor Swift’s Shake It Off and The Weeknd’s Blinding Lights.

Fuelled by their passion to collaborate, Martin, Kotecha and Payami are releasing a version of their brand-new single, Red Lights for the first StemDrop, kicking-off this new generation of global music collaboration. On October 26th, they will release 60-seconds of the new single Red Lights exclusively on TikTok. As soon as the song drops, the community will be able to access the ‘stems’ (the individual components of the song i.e., drums, bass guitar, vocal parts etc.) through the StemDrop H5 page and can create, record and share their own unique versions to kick-start their music careers.

As part of the partnership between Samsung & TikTok, announced in September at IFA conference in Berlin, Samsung will be facilitating the programme through product innovations that are open to all and exclusive to none.

The StemDrop Profile will also provide TikTok users, and creators a window into the StemDrop process, as new versions of the track from around the world are curated weekly by each of the individual song writing teams as well as TikTok, Syco, Republic Records and Universal Music Group. TikTok music curator Ari Elkins, singer-songwriter Astrid S and Your Boy Moyo will act as global ambassadors for StemDrop and host daily content on the StemDrop channel on TikTok.

“Hit songs are like diamonds and they can change an artist’s career overnight,” commented Cowell. “With tens of thousands of songs uploaded every day this idea will give aspiring artists the opportunity to collaborate with some of the most successful songwriters in the world. The premise was always very straightforward… ‘What would happen if the best songwriters in the world wrote a song for the world…….?’ We have no idea what’s going to happen. I do know there are so many incredibly talented people who are trying to stand out and I hope and believe this could make a big difference to their careers. It says everything about Max Martin, Savan and Ali that they have decided to give this song to the TikTok community to record and collaborate with them. And I want to thank them so much for believing in this idea. In addition, I want to thank TikTok, Samsung and Universal for their support and enthusiasm. Again, their passionate support of talented people is amazing.”

“UMG exists at the intersection of innovation and talent discovery, so we’re excited to partner with Simon and the incredible team he’s assembled to launch this new platform, harnessing the scale of TikTok, to leverage the artistry of creators worldwide,” added Sir Lucian Grainge, Chairman & CEO of Universal Music Group.

“I’m thrilled to be part of the next step in talent discovery,” declared Van Rongen. “I feel it’s the exact right moment to launch a music project where the creative process is fully in the hands of the creators on TikTok. I can’t wait to see what everyone will come up with and think that the world will be surprised by the enormous creative variety that StemDrop and the TikTok community will deliver.”

“We are thrilled to finally announce StemDrop to the world. Some of the biggest names in entertainment, music and technology are coming together to supercharge music discovery in a way never seen before, using the power of TikTok to unearth new talent. Every day, brilliant, undiscovered artists and songwriters turn to TikTok to share their music and find a global audience; StemDrop will put a spotlight on this talent and act as a springboard to help them build their careers.”

“TikTok’s mission is to inspire creativity and bring joy, and with StemDrop our aim is to provide our creative community, wherever they are, an opportunity to collaborate and create with the world’s most iconic songwriters and their work in a new and original way,” stated Paul Hourican, Global Head of Music Operations at TikTok. “The breadth and diversity of musical talent emerging on TikTok every day is breath-taking, and we’re committed to opening doors for artists and propelling new talent to find sustained success both on and off the platform. We can’t wait to see what this collaboration brings so thank you to Max, Savan, Ali, Simon and the teams at Syco, UMG and Republic who have helped bring this to life.”

“StemDrop provides an unprecedented opportunity capturing the spirit of experimentation and remains the cornerstone of the music community’s creative process,” said Monte Lipman, Founder and Chief Executive Officer, Republic Records. “We embrace and celebrate the innovation of these extraordinary individuals as they sail into uncharted waters.”

“From movies, games and music – Samsung understands that entertainment is the most exciting when it evolves,” advised Benjamin Braun, Chief Marketing Officer at Samsung Europe. “This partnership with TikTok, Syco Entertainment and Universal Music Group is a ground-breaking new chapter that will redefine music creation. As leaders in innovation, we feel a responsibility to constantly find ways to champion creativity – the openness of StemDrop does just that. This mission has been longstanding: from the launch of Samsung Spotlight, an initiative to support performing artists in the wake of the pandemic, to our partnership with UMG on Music Galaxy Thursdays, allowing music lovers free access to never-seen-before artist interviews, performances, and behind-the-scenes footage in the lead-up to New Music Friday. Now, our advancements in the foldables market are changing the way we use mobile devices as the ultimate tool for both productivity and self-expression. We’re extremely excited to build on our evolving role in the music industry, to continue leading the way in technological innovation, and to inspire the world to #MakeItWithSamsung”.