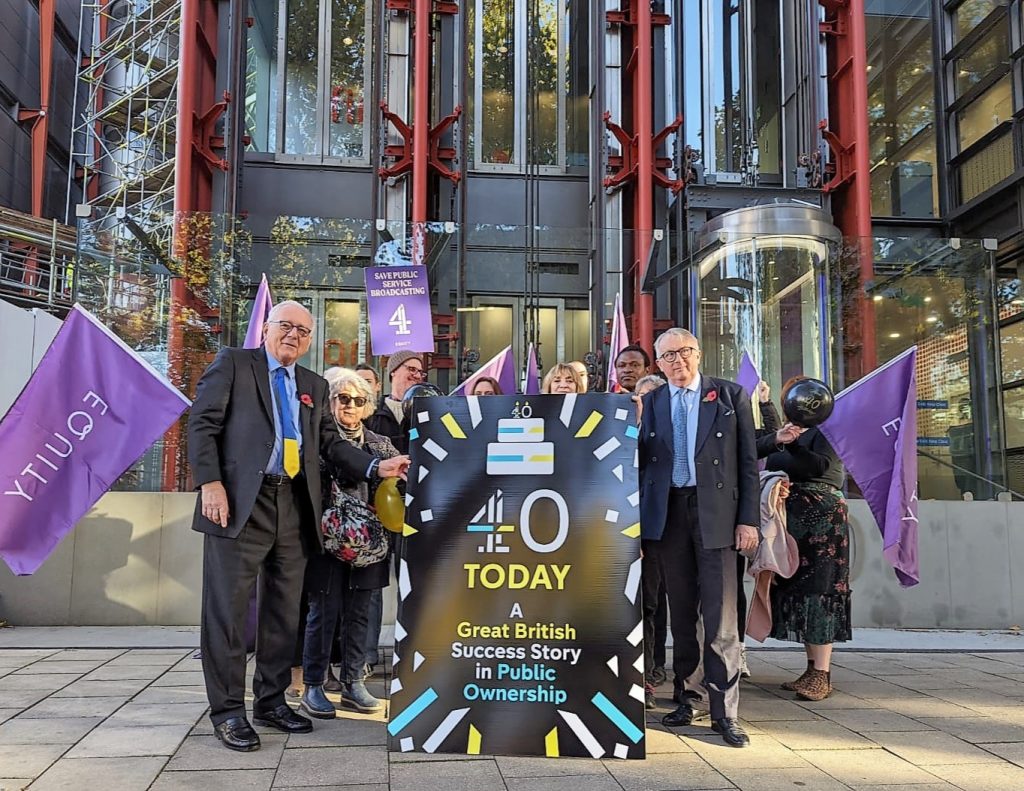 Supporters of Channel 4 have gathered outside the broadcaster’s offices in Leeds and London to hand in two giant birthday cards calling for the channel to stay in public hands.

The cards, which are 2ft and 5ft respectively, celebrate the channel’s first broadcast 40 years ago today and include the logos of the over 40 independent production companies which have signed up to the Channel 4 Ain’t Broke coalition launched earlier in 2022.

Channel 4’s birthday comes just days after a senior minister, Andrew Mitchell MP, pointed out that he and the Chancellor are both against the sale.

The news has given campaigners hope that when current Culture Minister, Michelle Donelan, finishes “re-examining the business case” on privatisation, the plans will be dropped.

Channel 4 Ain’t Broke highlights that as a publicly owned broadcaster funded through advertising, Channel 4 doesn’t cost the taxpayer a penny. Instead, the channel returned a profit of £74 million last year to reinvest in content, training, and businesses.

Concerns have been raised that privatisation risks hitting the levelling up agenda with a 35 per cent drop in regional jobs and over 60 businesses set to go bust.

The campaign actions have also garnered support from public figures and celebrities, with comedian Jack Rooke, the Archbishop of York, and Thick of It creator Armando Iannucci all lending their support.

Stephen Cottrell, the Archbishop of York, said: “To put it simply, there is nothing quite like Channel 4. For 40 years it has been a hugely innovative and successful broadcaster with a unique place in the creative British broadcasting economy. In many areas, Channel 4 pioneers a broad diversity of views and voices. It supports UK regions by moving beyond regional accents to the other things that shape us culturally and ethically, enabling us to appreciate our own national diversity and at the same time creating greater coherence and commitment to each other within that diversity. I believe that to privatise the broadcaster would not only be to compromise it but to be in danger of destroying it.”

Armando Iannucci, satirical writer and creator of The Thick of It, said: “As we reach Channel 4’s 40th birthday, it’s clearer than ever that it’s been both a creative and economic success story. It has spurred innovation, allowed new businesses to spring up across the country, and invested in jobs and training in areas and communities that TV and film have too often left behind. It has only been able to do that because of its unique operational model: publicly owned but commercially funded. Channel 4 was set up under Margaret Thatcher. She dismissed plans to privatise it: So should today’s leaders.”

Alan Clements, Managing Director at Two Rivers Media, added: “Businesses in the creative industry have been crying out for a change of course on Channel 4 for over a year. Those of us on the ground know that a change of ownership would be devastating for entrepreneurs and the distinctive content we make on these islands. Over 60 production companies are likely to go bust, with the nations and regions of the UK possibly losing 1 in 3 jobs currently supported by Channel 4.. Channel 4 supports thousands of jobs and training opportunities across the country, often focused on the areas least likely to have access to the industry otherwise. If the Government is serious about supporting businesses across the country it must stop this sale.”