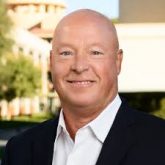 It is now in the 60 million – 90 million range that it originally told investors it would get to by 2024.

Disney+ debuted in November of last year. The company previously announced in April that the service had passed 50 million subscribers.

Much like Netflix, Disney+ subscriber numbers have been hugely boosted by the Covid-19 pandemic and consequential lockdown measures around the globe. Disney has fast-tracked some key releases to its streaming platform, including Artemis Fowl and Hamilton, and will soon be testing its first rental release with Mulan. The live-action Star Wars spin-off series The Mandalorian has also proved a big hit on the platform, recently receiving 15 Emmy nominations.

Speaking during a call to discuss the company’s Q3 earnings report, Chapek also revealed that between Disney Plus, Hulu and ESPN Plus, Disney has surpassed 100 million global subscribers.

The company reported Q3 revenue was $11.87 billion, lower than expected and down 42 per cent from the year before with the theme park division taking a $3.5 billion hit as a result of coronavirus lockdowns.

“Despite the ongoing challenges of the pandemic, we’ve continued to build on the incredible success of Disney+ as we grow our global direct-to-consumer businesses,” said Bob Chapek, Chief Executive Officer, The Walt Disney Company. “The global reach of our full portfolio of direct-to-consumer services now exceeds an astounding 100 million paid subscriptions – a significant milestone and a reaffirmation of our DTC strategy, which we view as key to the future growth of our company.”

Paolo Pescatore, TMT analyst at PP Foresight, described the results as “a better than expected quarter for The Walt Disney Company,” which, despite a fall in revenue, still managed to make gains in after-hours trading.

“It is very well placed given its vast portfolio of assets and unique franchises. Key to its future growth is direct-to-consumer services. The company smashed its own target for Disney+ four years ahead of schedule (60m-90m subs by 2024). Though it has been late to the streaming market, it is making good progress in a short period of time. This enables the company to have a closer and more meaningful relationship with the customer. Knowing more about a user’s habits can give them the confidence to create more big blockbusters and franchises.”

“This underlines the importance of a smart direct-to-consumer services. Serves as a catalyst to connect with new audiences in a different way. Though this might be alarming for the film business, it paves the way for a new way to reach users and maximise revenue. Also, it mitigates against the growing concern around piracy.”

“With this in mind, it must continue to aggressively promote its growing suite of video streaming services given the competitive nature of this market. There are too many services chasing too few dollars. Disney needs to ensure a growing slate of successful shows to ensure services like Disney+ remain an indispensable part of a household’s TV needs,” concludes Pescatore.

Commenting on the results, Mark Inskip, CEO Kantar Media Division, UK & Ireland said: “Walt Disney’s Q3 results have affirmed the success of the global launch of its streaming service Disney+, with the platform’s colossal growth going some way to compensate for the substantial hit profits have taken from the closure of parks in lockdown and falling ad revenue.”

“In the competitive streaming wars, Disney+ benefits from monthly subscription prices lower than rivals Netflix and Amazon Prime as well as premium content with the strategic release of movies such as Frozen 2 and Hamilton just in time for the Summer holidays. In lockdown, subscribers have flocked to engage with the new platform as a result, but the real challenge will come as restrictions lift and some consumers may be tempted to direct their entertainment budgets elsewhere”

“Our recent TGI Global Quick View study of consumers in 25 markets worldwide showed that over half of connected consumers have used paid TV or video streaming services ‘in the last week’, but that Netflix and Amazon Prime remain firm favourites across the world. As lockdown eases and household budgets remain tight Disney+ will face an uphill climb to retain its audience and keep pace with those leading platforms, as well as with free ad-funded challengers.”

Patrick Morrell, Director of Partnerships EMEA, The Trade Desk, said: “It’s clear from these results that Disney chose the right time to launch Disney+ globally. While customers may not have been able to visit the company’s theme parks, they went in their droves to the new streaming service, which has benefited from the rapid acceleration of streaming in lockdown.”

“But while the service has enjoyed fantastic growth, the key question is whether Disney+ experiences a significant drop off in subscription numbers as new sign ups reach the end of the free trial offer. A free month to burn through the Star Wars back catalogue and an abundance of classic kids’ films was always bound to attract consumers in their droves, but with the Covid price crunch taking effect, it remains to be seen whether Disney+ can retain the huge audience it initially attracted. Creating and offering new, premium content will be key to maintaining numbers – but this comes at a price. And with other parts of the Disney business feeling the pandemic pinch, the company would be wise to consider offering a ‘freemium’ version of its streaming service, supported by quality advertising.”