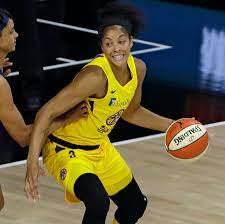 Sky Sports is scheduled to broadcast the WNBA’s landmark 25th season, including 17 regular-season games airing in European primetime, as well as the WNBA All-Star Game and a range of Playoff and Finals games.

The 2021 season officially gets underway this weekend, with all 12 teams in action. First up is the All-Star Game on May 14th, then fans in the UK will be able to tune into Sky Sports Arena and Sky Sports Mix on May 15th for the weekend’s first league match-up that will see two-time league MVP Candace Parker make her debut with the Chicago Sky at Washington against former MVP Elena Delle Donne and the Mystics.

Sky Sports will have at least one game per week on their channels. A selection of this season’s games will also be made available on the Sky Sports YouTube. Sky Sports is the NBA’s official broadcast partner and website operator in the UK.