At a press event in London, Sky has unveiled its first TV devices which are branded as ‘Sky Glass’.

Dana Strong, Sky Group Chief Executive Officer, unveiled the device declaring: “Just like a smartphone is more than a phone, Sky Glass is more than a TV.”

“This is a product that can only come from Sky […] It is the only TV in the world with Sky inside – no dish, no box, no fuss,” she added.

Sky Glass brings brings together all content from across Sky, BBC iPlayer, Netflix, Disney+, ITV Hub, All4, Spotify, Peloton, PlayWorks (with Peacock and Paramount+ to follow), and more. At the press of a single button, users can create a personal playlist of their favourite shows, movies and more across apps and channels, live and on demand.

Sky Glass TVs will be installed by Sky, and ready to go within ten minutes. The voice-activated device, created in partnership with Map Project Office, features a 4K screen with Quantum Dot technology, and built in Dolby Atmos sound and a sub-woofer. Users can just say “Hello Sky” to bring the TV to life, or simply walking past will also wake it (into standby) thanks to Glance Motion Technology. 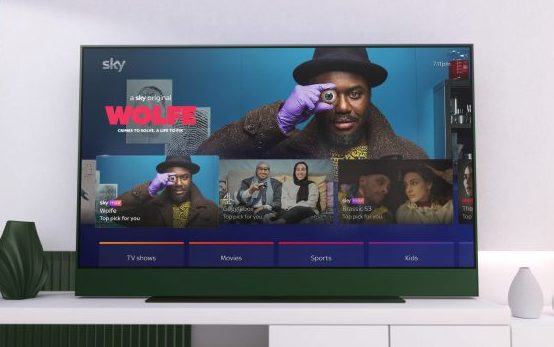 Sky also boasts that it is the first TV to be certified CarbonNeutral.

Sky Glass will be available in the UK from October 18th, before launching in additional European markets in 2022. Prices start at £13 a month – with customers paying off the device in the same way as a mobile phone contract. The devices can also be purchased outright with a 43 inch model costing £649; a 55 inch model for £849; or a 65 inch model for £1049.

Those who choose to pay monthly for Sky Glass will be able to swap their TV for a different model at any time.

In spring 2022, an additional 4K smart camera device will be made available for Sky Glass, allowing users to video call with other users, participate in watch parties with other households, play interactive games and more.

Strong further commented: “Sky Glass is the streaming TV with Sky inside, providing the total integration of hardware, software and content. Built on over 30 years of understanding what our customers want, this is a TV that only Sky could make. We believe this is the smartest TV available, and that customers will love it.”

Paolo Pescatore, TMT Analyst at PP Foresight, suspects the move won’t be welcomed by many of  Sky’s TV partners, suggesting it is all about ownership of the living room and increasingly of the entire connected household.

“For me, the news is all about the prospect of getting the premium Sky Q TV experience without a satellite dish,” he says. “This makes the overall service far slicker for households and opens up new revenue opportunities with higher margins for Sky. There is the prospect of innovative dual and triple play bundles with faster fibre and even gigabit connectivity.”

According to Pescatore, it will be hard for rivals to compete head on given Sky’s dominance in TV and position as an aggregator of key streaming services, declaring that “the end of a TV set-top-box is finally here,” and that it is ridiculous subsidising costly hardware when the two most popular services do not rely on a TV set-top box.

“However, it is hard to see where this new TV sits, with everyone already having a premium TV. Ultimately the focus for Sky is attracting users who cannot have or do not want Sky TV with a satellite dish,” he concludes.

Raman Abrol CEO of Vubiquity and GM at Amdocs Media, suggests that  the move is indicative of rapidly-evolving consumer demands and technological capabilities, which are driving digital service providers quickly to re-imagine their offerings.

“While Sky has already had tie-ups with the likes of Netflix for a number of years, extending to a joint subscription last year, Sky Glass signals the first step towards a new era of greater integration between broadcast TV and video streaming,” he comments.

“Consumers increasingly want ease of use and volume and diversity of content, which is what makes Sky Glass such a smart offering. By removing the need for additional hardware and combining subscription fees for a number of services to maximise the volume of content viewers can access, Sky is meeting evolving consumer demand for integration, personalisation and flexibility,” he adds.

Francesca Gregory, Associate Analyst of Thematic Research at GlobalData, described the launch as a “decisive move” that reflects the decline of cable and satellite offerings in favor of streaming alternatives. This is the final stage of acceptance when it comes to the explosive growth of Internet TV. GlobalData forecasts the streaming video on demand (SVoD) market to reach $5.1 billion by 2025, with Netflix and Disney poised to take a large proportion of this revenue.” she added.

“The ‘Sky Glass’ TV aims to carve out a space in this busy market by providing access to its competitors’ platforms in addition to Sky’s own large repository of content. It remains debatable as to whether this will be enough to buy Sky’s continued relevance – the belated release of its smart TV behind competitors will inevitably have cost market share.
“Previously, the company has been dubbed the default for sports fans and older consumers. However, the new product removes the necessity of a satellite and set-top box, adopting a sleek and seamless appearance that will appeal to a wider audience of tech-savvy streamers. The ultra-HD 4k Quantum Dot display also aims to entice streamers to leave their laptops in exchange for a higher spec viewing experience that capitalises on the drawn-out demise of cinema,” she suggested.