Survey: Will Thor and Top Gun: Maverick drive fans back to the cinema? 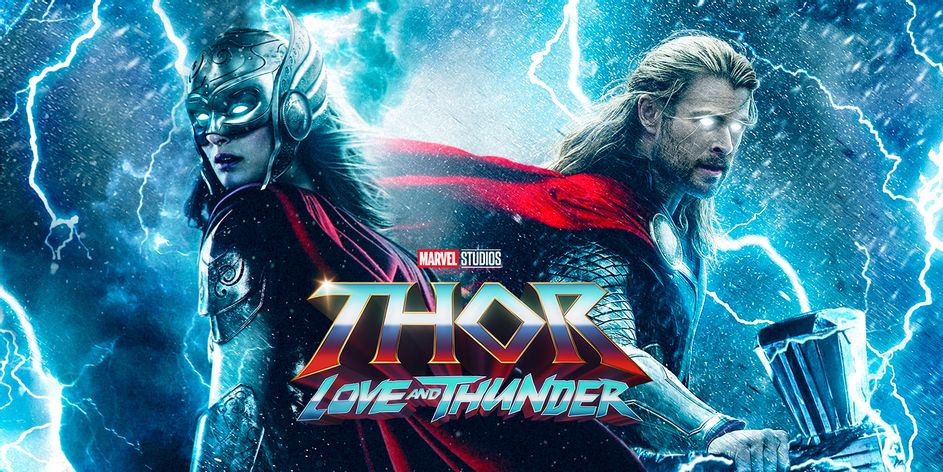 Summer is fast approaching, and that means a bevy of new big-budget movies are set to come out. But after back-to-back down years for summer movies due to Covid-19, which flicks have fans most excited to hit the cinema this year?

Luckily, Whip Media took a closer look at that question with a new survey, which looked at how consumers feel about the summer movie experience and what films they plan to watch in cinemas versus watching at home.

The survey found franchise films and sequels continue to attract cinema-goers while viewers still prefer to watch family and smaller films at home.

Marvel’s Thor: Love and Thunder, the survey found, is the movie that viewers said they most wanted to watch in the cinema. Of respondents who said they wanted to see the new Thor film – which brings back Chris Hemsworth in the starring role and will also feature Christian Bale and Natalie Portman – 77 per cent said they would prefer to see it at the cinema, compared to 23 per cent who said they want to watch it at home.

The next most-popular choice was Jurassic World Dominion, which 70 per cent of intended viewers said they would rather see at the cinema than watching on the couch. Fans are also looking forward to seeing Tom Cruise in Top Gun: Maverick, which comes out on May 27th, with 52 per cent saying they’d rather go and see it than wait for it to come out on a streaming service.

Interestingly, though, those were the only three films that a majority of respondents said they’d rather go see in cinema than watch at home; Jordan Peele’s Nope was the fourth-ranked flick, with 46 per cent saying they want to go see it at the cinema – indicating fans may have grown accustomed to watching new movies from home during the pandemic.

And in particular, respondents said they preferred to watch family-oriented titles at home. DC League of Super-Pets, the upcoming 3D-animated movie featuring voiceover work from Dwayne ‘The Rock’ Johnson and Keanu Reeves, was the most popular choice for at-home viewing, with 80 per cent of respondents saying they preferred to see it at home. Minions: The Rise of Gru wasn’t far behind at 72 per cent, while 61 per cent said they would rather see Pixar’s Lightyear at home.

When it comes to films targeted at adults, the biopic Elvis and the horror movie The Black Phone also received more votes for at-home viewing, at 72 per cent and 70 per cent, respectively.

Here is a look at the full survey data: 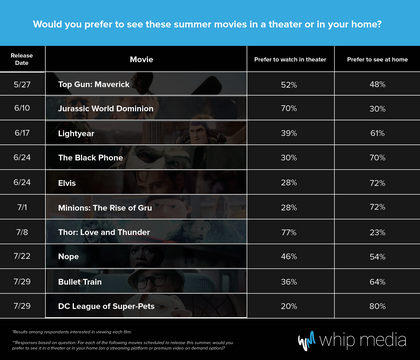 **Responses based on the question: Would you prefer to see these summer movies in a cinema or in your home (on a streaming platform or PVoD option)?

From a macro standpoint, Whip Media found more indications movie fans have grown accustomed to watching movies at home. The company’s 2022 survey found a majority of respondents (70 per cent) said they are more willing to wait and purchase a title they’re on the fence about seeing, compared to 50 per cent who said the same thing last year.