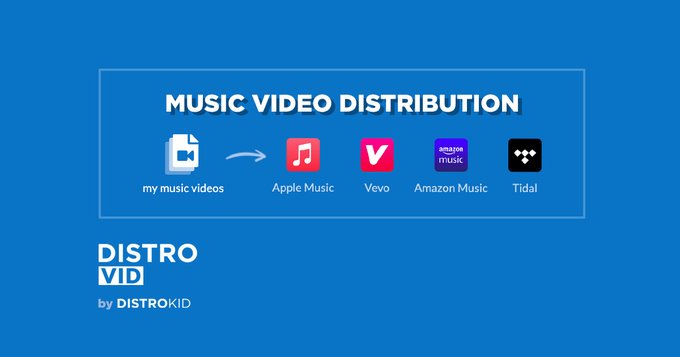 DistroKid, a distributor of independent music, has launched DistroVid, a new music video distribution service that enables any artist to upload an unlimited number of music videos to leading digital service providers for one price.

DistroVid’s launch partners include Apple Music, Amazon Music, TIDAL and Vevo, with more digital service providers expected to come online in the coming months. DistroKid says it is the first music distributor to offer this kind of deal to artists. DistroKid pays artists 100 per cent of their earnings.

With DistroVid, any artist can upload as many music videos as they want to multiple streaming services for $99 (€94).

“We’re thrilled to partner with DistroVid to provide a direct pipeline to Vevo for independent artists,” says Jordan Glickson, Vice President, Music & Talent, Vevo. “Now more than ever, music videos are an essential part of an artists release strategy, providing a valuable promotional opportunity to connect with fans on a deeper level. We’re so excited to assist in building an additional bridge for artists to their fans and to bring their music videos to more screens, and more music fans, across the globe.”

“At TIDAL, we value bringing fans and artists closer together, and video is an integral part of building a connection,” said Dan Murphy, SVP of Partnerships & Business Development at TIDAL. “With DistroVid, we’re excited to be giving independent artists a more simplified way to share video content with their fans on TIDAL.”

“I’ve always stressed the importance of music videos to every artist we’ve worked with–they really help give potential fans a way to connect with both the artist and their music,” said DJ HOPPA, an artist and founder of his own label Broken Complex. “Up until now it’s been expensive and difficult to add my music videos to streaming services, which means our fans are forced to bounce between different apps to see them. DistroVid changes all that. The new tool makes it easy and affordable to upload as many videos as I want, then send them directly to where fans are already listening to my music. DistroVid is going to be a game-changer for my independent label and for independent artists everywhere