Sky lights up landmarks with Gangs of London guerrilla campaign 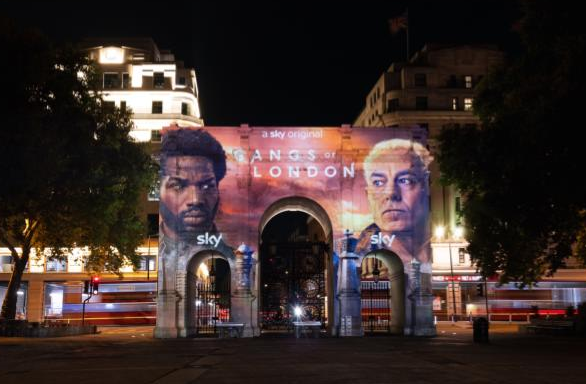 Sky’s Entertainment Marketing team – in collaboration with Pixel Artworks, Rapport, Sky Creative and Mediacom – has overtaken some of London’s most iconic landmarks and locations by staging a guerrilla projection campaign to mark the Season 2 launch of the BAFTA winning Original Production, Gangs of London.

A total of 56 sites across London, including locations such as Marble Arch, Waterloo Station, Harrods and London Bridge, are lit up with new artwork developed as part of the overall launch campaign. The projections will start going live from 18:15 on October 20th and will remain in-situ for approximately 75 minutes in each location. The full creative campaign, developed by Sky Creative, Sky’s in-house advertising and creative agency, also includes a full range of activations across TV, OOH/DOOH, cinema, digital and extensive social and influencer outreach.

Sky says that delivering the 56 projections has been a triumph of creative collaboration across Sky, Rapport, Pixel Artworks, Sky Creative and Mediacom. Created and conceptualised by Sky Creative, the wider campaign uses chess as a vehicle, bringing to life themes of power plays and dominance in each character’s battle for the soul of London. The bold use of a blood red storm across the artwork projections aim to reinforce the sense of danger and foreboding; emotions that are a constant presence throughout the second season. This thinking was the springboard for a different type of media activation that Sky hadn’t previously executed at this scale. The projections will be seen at vast sizes and with each one built in motion, which ensures the campaigns visibility.

Lucy Johnstone, Sky Entertainment Head of Marketing, commented: “This has been one of the most ambitious marketing activations we’ve ever done and to get it right required a monumental collaboration from everyone involved. The premise of Gangs of London is dominance and power so it made sense that we reflected that sentiment in the scale and placement of the campaign. It has been awesome.”

Simon Corkin, Sky Creative, Creative Director, said: “It’s been a brilliant team effort bringing this to life. It’s a new for Sky Creative and with this flexible media it allowed us to really think outside the box when it came to developing the creative at such an enormous scale”.

Thomas Rapley, Media Development Director at Pixel Works, said: “We always had a big vision for how this campaign could be delivered and it’s been a monumental task to bring it to life. Delivering activations across so many locations in one evening is no mean feat and it wouldn’t have been possible without the involvement of so many people, not least Sky’s marketing team.”

James Brunton, Business Director at Rapport, added: “It was clear from the start that Gangs of London needed to be woven into the fabric of London’s culture to elevate the campaign beyond traditional placements. Projections at this scale have never been done before and the result is truly breath-taking. This has been a mammoth collaborative effort between all parties and demonstrates the physicality, agility, and power of out of home to keep delivering true audience engagement at scale.”.