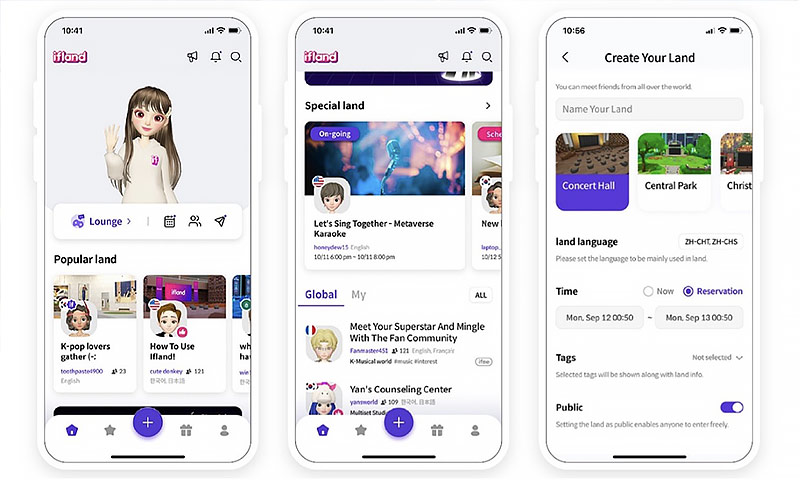 Korean telco SK Telecom (SKT) has revealed that its metaverse platform ‘ifland’ has launched simultaneously in 49 countries and regions throughout the world.

The global version of ifland supports English, Chinese (Traditional Chinese, Simplified Chinese) and Japanese, and is available for both Android and iOS smartphone users. The existing ifland app will be upgraded to the new global version. For instance, the app will automatically activate in the Korean mode when accessed from Korea, and the global mode when accessed from overseas countries.

Under the slogan, ‘The New Way of Socializing’, ifland will deliver what SKT says is a differentiated communication experience within the metaverse.

SKT will effectively expand ifland’s global reach through partnerships with major telcos in each continent. The company is working with e& (formerly known as Etisalat Group) in the Middle East, Africa and Asia, and Singtel in South East Asia.

On November 18th, 2022, SKT signed a memorandum of understanding with NTT Docomo, the largest mobile operator in Japan, to cooperate in areas of content, technology and service to further advance their metaverse services. Partnership discussions with other telecommunications companies are also underway.

Together with its overseas partners, SKT plans to develop specialized features tailored to each different region. They will also promote various metaverse-related events and business cooperation, including joint production of popular local content.

Earlier in October 2022, SKT signed a memorandum of understanding with Thailand’s Bansomdejchaopraya Rajabhat University (BSRU) and Korea’s Dong-ah Institute of Media and Arts (DIMA) – which has been providing a variety of programmes including Teen Teen Audition in ifland since the beginning 2022 – to create a global metaverse campus. SKT will actively support BSRU and DIMA to overcome the limitations stemming from the physical distance between the two schools through ifland.

In addition, the company is working with Birger Christensen, a Copenhagen-based fashion company with over 150 years of history, to launch digital skins for avatars in ifland within this year to enable the MZ generation to better express themselves.

SKT has also updated key features of ifland. The company opened a global lounge within ifland to help those new to the metaverse to experience the new world with greater ease, and introduced avatars of many different colours.

In addition, to facilitate communication between hosts and participants of gatherings in ifland, SKT applied features such as ‘one-on-one direct messaging’ and ‘3D speech bubble.’ ‘Live voting’ feature was also introduced to check the opinions of participants in real time, and ‘ifme motion sharing’ feature was adopted to apply the user’s facial expressions to his/her avatar.

To celebrate the global launch of ifland, SKT will be showcasing a wide variety of live K-pop content every week. Original metaverse K-pop content titled The Fan Live Talkon will target K-pop fans overseas, with over 50 per cent of content provided in English. Every week, ifland will offer live content related to K-pop – e.g., auditions for K-pop trainees and nurturing of K-pop idols – for global fans to enjoy.

During the remainder of 2022, through ifland’s SNS account, SKT plans to hold events to give out diverse artists’ goods and gifts to overseas users who participate in the meet-ups of K-pop content.

Meanwhile, ifland has surpassed 12.8 million of cumulative users as of October 2022, which represents a four-fold increase compared to 3 million early in 2022 thanks to differentiated content offerings such as original metaverse content.

“Since its launch in Korea in July 2021, ifland has grown rapidly to become the best social metaverse in Korea by attracting users of diverse age groups as well as many different organisations,” said Yang Maeng-seok, Head of Metaverse Office at SKT. “Now, we will go beyond Korea to expand our reach in the global market to take customers metaverse experience to the next level.”