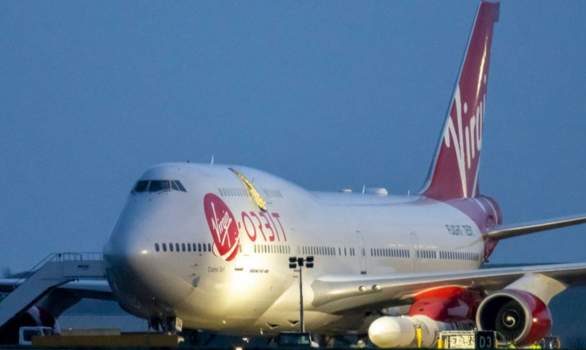 Virgin Orbit failed on its debut British launch mission. Its heavily modified ‘Cosmic Girl’ 747 aircraft took off on time in the evening of January 9th from Spaceport Cornwall, complete with its LauncherOne rocket strapped under its port wing. But the rocket failed to work as designed.

The LauncherOne’s second stage suffered a technical “anomaly” and full details of the problem are still sketchy, but the bottom line is that the rocket’s nine satellites were lost. The satellites were insured.

Sources at Virgin Orbit suggest that LauncherOne’s second stage did not generate sufficient thrust to achieve its target height, speed or trajectory for orbit and the mission aborted.

The mission required the aircraft to fly to 35,000 (10,000 metres) and to a designated drop zone for the LauncherOne rocket off the south-west of Ireland. The rocket’s first stage seemingly performed correctly on its route half-way around the planet where its initial three-minute ‘burn’ help it reach its nominal height and speed (some 20,000 mph) with telemetry indicating that all was well.

Matt Archer, the UK space agency launch programme director, told journalists in Cornwall that he was disappointed but proud of what the mission achieved. “The second stage engine had a technical anomaly and didn’t reach the required orbit,” he said. He didn’t supply any further explanation for the failure.

“We’ll dust ourselves off and we’ll go again. This is what space is about – it is hard,” he added.

The problem is not the first challenge for Virgin Orbit. It lost its first test flight (with a problem with the rocket’s first stage) although four subsequent tests went well, with Virgin Orbit reporting that it had successfully orbited 33 satellites overall for clients.

However, the loss will create anxiety for its Nasdaq-listed Virgin Orbit Holdings Inc’s investors. The company floated in December 2021 with values of $10 (€9.31) per share. Last week, that price had drifted downwards to just $1.67. The past few days had seen its share price recover to around $2. That recovery is likely to suffer when the market opens on January 10th.

The setback will mean a hold on planned further launches while an investigation and remedial work takes place from its Long Beach HQ and Mojave Desert facility. Virgin Orbit had hoped to achieve up to 12 launches per year from a variety of launch sites. It has agreements in place for launch sites in Australia, Luxembourg and South Korea as well as Cornwall and contracts in place for $143 million.

In a statement released January 10th, Virgin Orbit said: “Though the mission did not achieve its final orbit, by reaching space and achieving numerous significant first-time achievements, it represents an important step forward. The effort behind the flight brought together new partnerships and integrated collaboration from a wide range of partners, including the UK Space Agency, the Royal Air Force, the Civil Aviation Authority, the US Federal Aviation Administration, the National Reconnaissance Office, and more, and demonstrated that space launch is achievable from UK soil.”