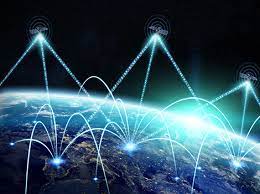 Paris-based Euroconsult says that the satellite industry is rapidly changing and adopting laser links for communications both to-and-from Earth, but very much from satellite to satellite. The links are more efficient and harder to intercept.

Euroconsult’s report looks at the prospects for further growth and says that inter-satellite communications via optical links are rapidly becoming the preferred means of transmission in space.

“This is opening up a dynamic new market for optical communications terminals and inter-satellite links driven by the growing number of Non-geostationary broadband constellations,” says the research company.

The forecast is dramatic, and Euroconsult says that by 2031 there will be more than 70,000 in-orbit optical terminals in use between orbital satellites.

According to Euroconsult’s report, major satellite constellation operators see the benefits of switching inter-satellite communication from mainly by radiofrequency electromagnetic waves to optical or laser communication, but there are key technological challenges to address before widespread adoption, including link reliability governed by beam accuracy.

“Optical communications will also enable data-relay space services thanks to terminals used for third-party communications, usually to transfer data to satellites orbiting at different altitudes. Companies such as Skyloom have been founded in this purpose. Though less than 10 data-relay capable satellites were in orbit at the end of 2021, the number of such terminals should constantly grow over the decade to reach 250 units by 2031. Earth observation (EO) data providers are expected to be the main stimulators for this growth.,” states Euroconsult.