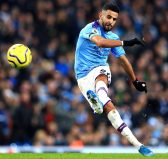 The Premier League broadcasters have reached an agreement over which fixtures each will air from June 17th up to July 2nd, with Aston Villa vs Sheffield United set to kickstart the resumption of the season immediately followed by Manchester City vs Arsenal – with both games on Sky Sports.

Tottenham Hotspur vs Manchester United will be the big Friday night game on June 19th, also on Sky Sports.

Bournemouth vs Crystal Palace will play on the evening of June 20th, and create history by being the first ever Premier League game to air live on terrestrial television via BBC, whilst Brighton vs Arsenal on June 21st will mark the first occasion a 3pm Saturday kick-off has ever been televised.

All 92 remaining fixtures will be televised across Sky Sports, BBC, BT Sport and Amazon Prime Video.

A number of Sky’s fixtures will be shown on FTA channel Sky Pick – including Manchester United vs Sheffield United on June 24th.

Dates and TV times have also been set for the FA Cup quarter-finals.