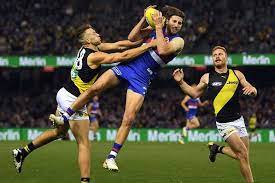 The AFL (Australian Football League), the governing body of Australian rules football, has announced the biggest broadcast rights deal in Australian sporting history after extending its partnership with the Seven Network, Foxtel and Telstra for another seven seasons.

It came after Channel Nine and streaming service Stan also made significant plays for the rights, as did Paramount, the owner of Network Ten.

Seven and Fox Sports will continue jointly to broadcast games, a partnership they have held since 2011.

The last major broadcast deal – covering free-to-air and subscription television, and online streaming – was signed in August 2015 and was worth A$2.5 billion over six years from 2017-22.

In 2020, the existing deals with broadcast partners Seven, Foxtel and Telstra were revised and extended until the end of 2024 for a total of $946 million to provide certainty as the League rebuilt its finances after the initial impact of the COVID-19 pandemic.

The three-month negotiation process for the new 2025-31 deal concluded in the early hours of September 6th before the announcement, with AFL chief executive Gillon McLachlan saying the result was a huge win for the game at all levels.

“We want to be the game for everyone. And this partnership will help us to do more to engage with all communities, in all states and territories and across Indigenous and culturally diverse communities,” he stated. “This partnership will provide unprecedented levels of financial support to invest more in ensuring every person who wants to play footy will be able to play footy.”

“It will allow us to invest heavily in expanding our reach into the local community and also to invest in the next generation through more digital products that are targeted at attracting kids and providing a pathway to engaging physically with our game.”

The AFL will still have control of the Grand Final starting time, which it says will be an annual decision, but has made changes to its broadcast structure, with there to be Thursday night games in the first 15 rounds of the season from 2025 onwards. The same amount of games will be broadcast on free-to-air TV each season as is currently, but Fox Footy has won rights to have their own commentary teams for each game.

The League is also in “active discussions” with its partners on bringing forward the start time of Friday night games in the next agreement.

McLachlan said the new broadcast arrangement, which will expire in nine years, “contemplates” a 19-team competition as the AFL gets closer to making a call on Tasmania’s bid for a licence. The outgoing AFL boss said the broadcast deal didn’t change the equation for Tasmania’s hope of a standalone team.

“Tasmanians should have faith in their government that they’re prosecuting their interests. I don’t think today changes anything. The Commission’s commitment to the 18 shareholders and clubs and others is that if it’s the right deal for football, which includes all the Tasmanians but also everyone across the country, if it’s the right deal we’ll push ahead but also if it’s not then it won’t go ahead,” he said.

The AFL Players’ Association had wanted to wait until after the AFL had completed its new broadcast deal before entering talks on the next Collective Bargaining Agreement for players, which is soon to expire in 2022.

Key points of the deal: