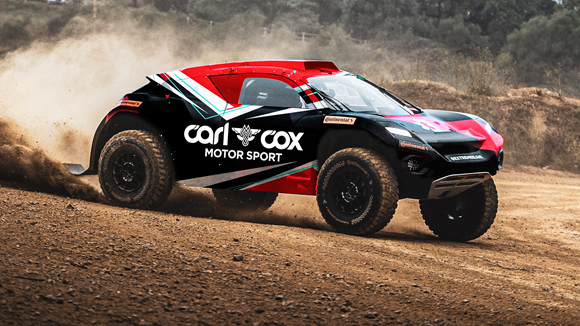 The eponymous team marks Cox’s first venture into electric racing, however he is no stranger to the world of motorsport having launched Carl Cox Motorsport officially in 2013 as a multi discipline outlet for vehicles with two, three and four wheels. Cox, Founder and Team Principal of Carl Cox Racing, commented: “I’m here to make a difference. To have the opportunity to be part of something so dynamic on four wheels is a dream come true. Racing, like music, is in my blood and I’m going to bring my passion and energy into this series and build something special. Participating in electric racing is new to me but I’m a fast learner and will bring my hard earned know how and experience into the mix at Extreme E. Carl Cox Motorsports is here to take on all comers and we are going to jump straight in. We are in it to win it.”

As well as a love for anything fast, Cox has a huge interest in innovation in motorsport, which ultimately saw his attention drawn to Extreme E. While Extreme E marks something completely new for his career in motorsport, Cox is not unfamiliar with the XE paddock. The long-time motorsport enthusiast joined the championship for its first ever double-header event in Sardinia last season, and had a lap around the course. That evening he played an impromptu DJ set and became part of the Extreme E family. Within weeks he was planning his own team. The venture will enable Carl Cox Motorsport to embark on a whole new chapter as it navigates the sport for purpose side of racing and gets to live and breathe the possibilities of sustainabile mobility and diversity. Alejandro Agag, Founder and CEO of Extreme E, said: “We are incredibly excited to welcome Carl and his Carl Cox Motorsport Extreme E team to the championship. We all know Carl for the superstar he is, but beyond his talents in music it is clear his passion for motorsport runs deep. We can’t wait to work with him and his team as we help them on their journey into sustainable racing. A true icon in music and entertainment Carl will be an important beacon for our series, bringing a whole new energy to the championship and our mission to raise awareness around the world about important climate and societal issues, and their solutions. The grid continues to offer up excitement for our fans, and the countdown to Season 3 is officially on!”
Extreme E aims to minimise environmental impact but maximise awareness, racing in places that have already been damaged or affected by climate change. The all-electric series takes fans deep into the heart of the most pressing environmental issues facing the planet. At the same time, the championship has built-in equality and diversity, with each team fielding one male and one female driver, making it the world’s most diverse racing series.Alon Shulman, CEO of World Famous Group, an experienced brand strategist and Cox’s manager, will take on the role of Team Director at Carl Cox Motorsport Extreme E. Shulman commented: “On the racing side Carl Cox Motorsport Extreme E will be competitive from day one and we have various strategic plans that will elevate the team and what we can bring to the series. We will also be actively supporting the host territories Extreme E environmental projects. My role is to make sure that our team is a 365 operation, not just focused on the race weekends, and to maximise the opportunity that we’ve been presented with. Underpinning everything of course is team boss Carl Cox. He is an exceptional human being who will be fully hands on with sleeves rolled up ensuring that we deliver over and above at all times, on and off the track.”

Carl’s team will make its debut when Season 3 of Extreme E gets underway in Saudi Arabia on March 11th-12th, before moving on to the UK in May for race two.