Ninja Warrior UK is returning with new season on ITV and ITV Hub.

Potato, the ITV Studios label behind The Chase, Beat The Chasers and Moneyball, has confirmed that the hit TV entertainment series will be back bigger, faster, harder and complete with an all-new competition structure.

In a twist on the format, and for the first time in the show’s history, the hunt is on for two champions, as the UK’s top female and male competitors take on the most challenging course ever to be crowned Ninja Warrior UK Male and Female Champions.  The contestants will not only face each other but they will also have to face the ‘Ninjas’ – a team of professional Ninja Warrior athletes – in head-to-head races.

Ben Shephard, Rochelle Humes and Chris Kamara will preside over the action as contestants take on new courses, new obstacles and even bigger challenges designed as the ultimate test of strength, speed, and courage.

Michael Kelpie, MD of Potato and Executive Producer, said: ‘There is no other show like Ninja Warrior UK; it’s bigger, tougher, more exciting than anything else on TV and proper Saturday night entertainment for the entire family. We’re thrilled to be back with Ben, Kammy and Rochelle, filming in front of a full audience and with loads of exciting new surprises for this year’s competitors – and, most importantly, for the viewers.” 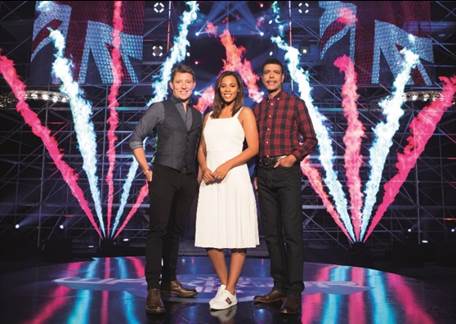 Katie Rawcliffe, Head of Entertainment Commissioning at ITV, added: “This all new, enhanced and reinvigorated series of Ninja Warrior UK contains all the electricity, excitement and entertainment needed to make it compulsive Saturday night viewing. Let the challenges commence.”

Kamara commented: “I’m so excited about the return of Ninja Warrior UK, it’s always a blast getting to see these incredibly fit humans coming onto the course thinking it’ll be a breeze, but little do they know it never is. Especially in this new series, with an even more difficult course and a brand-new format. I can’t wait to rejoin my old pals Ben and Rochelle and see who will be crowned Ninja Warrior UK Male and Female Champions.”

Ninja Warrior UK is based on Sasuke, a TBS format and will be produced by Potato, part of ITV Studios. The series will be executive produced by Potato’s Michael Kelpie, Martin Scott, and Helen Tumbridge, and is set to go into production in May.  The series is commissioned for ITV and ITV Hub by Kevin O’Brien, Commissioning Editor and Rawcliffe.