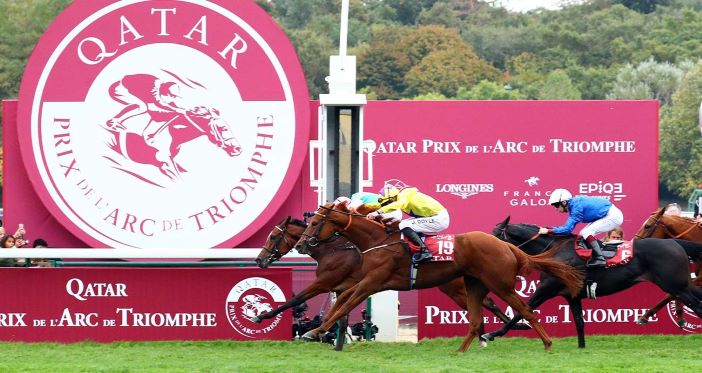 HBA Media, in its first year as France Galop’s dedicated global horseracing distribution partner, has secured the event greater broadcast reach and exposure than ever before.

A total of 22 broadcasters will showcase the Qatar Prix de l’Arc de Triomphe, with the majority taking the live feed which will feature the principal race, alongside a collection of elite supporting Group 1 races. It should also be noted that this year more than 15 TV channels have chosen to broadcast a two-hour programme around the Arc, highlighting more than ever the race and its international influence.

UK commercial broadcaster ITV has re-affirmed its longstanding commitment to the event signing an exclusive free-to-air three-year agreement. Its flagship coverage will be live on ITV1 and STV from 13:00 – 15:30 on Sunday, October 2nd.

“The Prix de l’Arc de Triomphe is one of the highlights of the racing calendar and we are delighted to be able to continue to bring exclusive, free to air coverage of this unique event to our viewers for the coming years,” commented Niall Sloane, ITV Director of Sport.

Strong European coverage has been secured and for the first time Viaplay will give the event coverage on their OTT platform across Scandinavia. Other European channels include Sky Sports Racing, Virgin Media (Ireland), RAI (Italy), WeDoTV (Germany / Switzerland / Austria), Silknet (Georgia) and the BBC providing further UK exposure on Radio 5Live.

The US audience will be catered for with FOX Sports showcasing a dedicated live one-hour programme. In addition, CBC will offer live exposure for Canadian viewers.

Australian viewers will be able to watch on FTA through Racing.com and via Entain’s OTT channels in a first for the continent. Similarly, SuperSport will transmit live coverage to 48 countries across Africa.

Audiences in the Middle East have a variety of broadcast options with DMI (MENA) broadcasting Qatar Prix de l’Arc de Triomphe live. Al Rayyan (Qatar) will broadcast for six-hours live on Sunday while Al Kass (Qatar) is set to provide a weekend of riveting racing by showcasing both the Saturday and Sunday racecards.

The Japanese contenders will continue their chase for an elusive first Arc win for the country and a plethora of broadcasters will bring the event live to the territory. The Green Channel, Radio Nikkei, Fuji TV and Continue will all provide significant coverage hoping that one of the four Japanese raiders can win, including the leading chance and promising four-year-old, Titleholder.

Complementing the broadcast distribution are Reuters and Transworld Sports – both will distribute the full event to their wide networks of news outlets.

“We are delighted that within our first year representing France Galop and its powerful racing portfolio HBA Media has achieved coverage in two previously untapped continents (Australia and Africa),” said Henry Birtles, Chief Executive of HBA Media. “Alongside this and the multiple broadcast agreements, the Arc has genuinely secured global recognition. With the quality of international contenders in the Arc, the extensive worldwide audience are in for a real treat and will enjoy one of Europe’s greatest sporting occasions.”

“The international exposure of the Qatar Prix de l’Arc de Triomphe, voted the greatest race in the world five times in the last seven years, is a major challenge for France Galop and the influence of French racing abroad,” said Delphine Violette, Director Commercial and Marketing for France Galop. “The increase in the number of broadcasters and the relevance of the territory covered are real satisfactions for this first year of collaboration with HBA Media.”