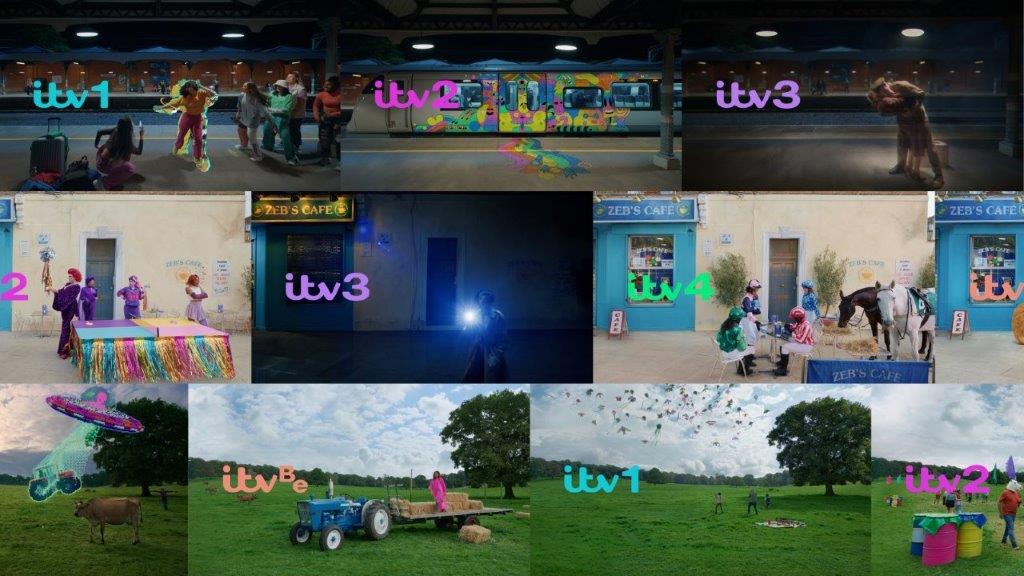 Ahead of the launch of AVoD service ITVX, commercial broadcaster ITV’s channels have been given a fresh look, with new channel branding, on-screen presentation and idents rolling out across all on air channels.

ITV Creative and brand agency DixonBaxi have partnered on the work, as well as the creation of the new brand identity for ITVX, which launches officially on December 8th.

The name and branding for ITV’s digital destination streaming service was produced by DixonBaxi, and turns streaming conventions on their head, or more accurately rotates them 45 degrees, with an X in place of in the more commonly used +.

“We are using the launch of ITVX this Autumn as a moment to give ITV’s broadcast channels a modern and fresh update too,” explained Jane Stiller, ITV’s Chief Marketing Officer. “This is all driven by a future where both broadcast and streaming will be equally crucial parts of how viewers engage with us.”

“Viewers will see what we do in broadcast and streaming as much more joined up and we will be able to seamlessly cross promote across the platforms, enabling greater content discovery. Everything will look and feel modern and relevant, with each platform or channel having a simple twist. This approach will flow into our new idents too, which are created to reflect and connect with modern Britain.”

“We have an exciting autumn in store for viewers, whether that’s I’m A Celebrity, The World Cup or the launch of ITVX with more new free content than anywhere else, so it feels like no better time to refresh our branding across the breadth of what we do.”

“We think this a brilliant opportunity, through branding, design and motion to have the most contemporary broadcast branding in the UK, while allowing us to move more seamlessly between broadcast and streaming,” she concluded.

“It’s been an amazing experience working with ITV Marketing and ITV Creative on this ambitious refresh,” added Jed Carter, Design Director, DixonBaxi. “A single coherent design system – bursting with personality – unites ITVX and ITV’s channels. A unified approach to logos, colour, typography, voice and motion connects the family of brands to create one connected brand experience while allowing each brand to express its own unique personality.”

Motion principles and digital gestures inform the new on-screen presentation across channels, thematically linked but all individual, in keeping with the channel personalities. A bespoke suite of typefaces was created by DixonBaxi in collaboration with type studio F37 Foundry, for ITV’s channels and its new streaming service, ITVX. In addition, a bold new suite of channel audio beds was crafted by London music and sound house The Futz Butler to be used across all channels to further continue a consistent brand experience.#

As part of the refresh, ITV returns to ITV1, to give more equal footing to broadcast and streaming, with ITV1 and ITVX as ITV’s key viewer destinations.

A new idents system also launches today and, in a broadcasting first, will be network wide.

“With everything we’ve done with the On Screen Presentation, we’ve tried to make sure it’s one brand-with a twist of personality for each channel or service,” said ITV Creative ECD Tony Pipes.

“With the idents, we’ve done the same, creating an ITV Multiverse, where depending on what channel you view it on, you see the same scenes but with a different view. This gave us the chance to reflect each channel’s tone, using specially shot scenes, animation and CGI and give the viewer a new surprise depending on where they view the idents. A simple device that is full of creative potential,” he suggested.

In what it says is an innovative break from tradition, the concept for ITV’s new idents spans the entire network, rather than just one channel. Shot in five archetypal locations across the UK, each channel’s logo ‘swipes’ our viewpoint, leading the viewer to that channel’s own spin on the scene.

Whether it’s at the corner cafe, in the beautiful countryside, at the train station, looking over a city skyline or a day at the seaside, every channel takes ownership of the location with its own unique personality and different twist. The ‘swipe’ motion of the channel logos is a device reflected across all of the refreshed on-screen presentation, creating a cohesive feel for our channels. Three locations launch on November 15th, Cafe, Train Station and Rural, and then Cityscape will follow in early December, along with several Christmas Idents for ITV1. The final location, Seaside, will launch in early January 2023.

Each ident received a custom track created by Echoic to fit the tone of the channel and the creative idea.

The new refreshed branding and idents go live November 15th, ahead of the launch of ITVX.