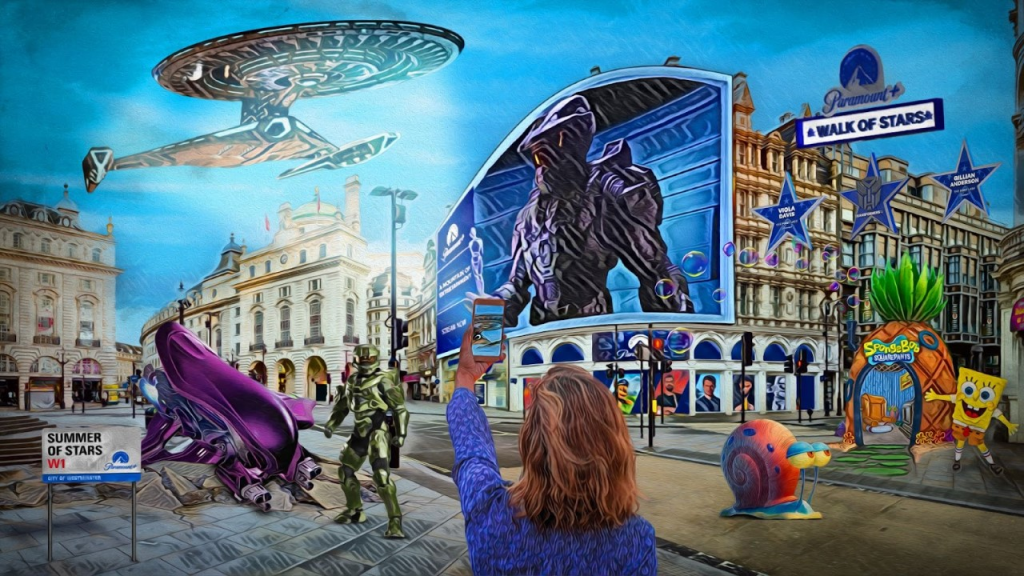 Paramount+ has joined forces with London’s West End for a summer takeover event. Paramount+ is bringing the UK capital’s district to life with a series of consumer-led installations, pop-ups and activities, with the takeover introducing some of the world’s most recognisable stars and characters, in partnership with Heart of London Business Alliance and Westminster City Council.

Spanning four of the West End’s busiest streets, the Walk of Stars, the streaming service’s answer to the Hollywood Walk of Fame, sees 50 illuminated stars hanging above the capital’s world famous thoroughfares. The giant stars honour Paramount legends, including Sylvester Stallone, Bryan Cranston, Gillian Anderson, Michelle Pfeiffer and Viola Davis, whilst other stars are based on hit franchises including Transformers, Star Trek and Scream.

The centrepiece of the takeover is the pop-up experience in Piccadilly Circus, a space giving fans the chance to immerse themselves in iconic films and shows through set experiences, memorabilia and stunt recreations.

The space boasts replica sets from sci-fi favourite and Paramount+ original HALO, while the Star Trek: Discovery area houses the real USS Discovery captain’s chair and hologram experience. There is also the Mission: Impossible selfie challenge, allowing attendees to recreate the iconic rappelling scene from the celebrated blockbuster. And for fans of gripping drama, a Yellowstone and 1883 stage will give visitors a chance to jump into the action, donning Stetsons and sheriff badges as they become part of the epic content.

Meanwhile Leicester Square, the home to Hollywood premieres, is being transformed into Leicester SquarePants, with the beach loving Bikini Bottom resident pitching up in his pineapple home and serving up Krabby Patties and other surprises for a limited time. Adding to the interactive invasion of the West End, Piccadilly Circus now has an HALO installation, bringing the eternal battle between the UNSC and the Covenant to the streets of the capital.

Bringing Hollywood to the heart of London for visitors, each installation, experience and pop-up is connected by augmented reality, meaning passersby can interact with the iconic films and shows displayed on the Walk Of Stars or even enjoy an aquatic adventure with SpongeBob and his friends in Leicester SquarePants.

Free tickets can be booked in advance for the spectacle through EventBrite.