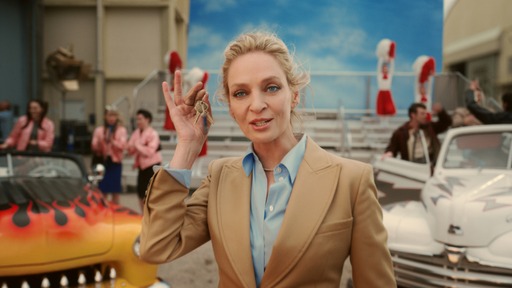 Paramount Global will stage what it has called “its biggest and most ambitious marketing campaign in the UK” throughout the summer, to herald the launch of its new streaming service, Paramount+, in the region.

Paramount+ will be available in the UK and Ireland from June 22nd. The launch line-up will include exclusive originals, blockbuster films from Paramount Pictures and a wide selection of Paramount’s most iconic shows, including the sci-fi smash HALO, Star Trek: Strange New Worlds, The First Lady and kids’ favourites Kamp Koral: SpongeBob’s Under Years and PAW Patrol: The Movie.

An advertising campaign starring Uma Thurman will see the Hollywood star give viewers a peek behind the iconic Paramount mountain, to introduce them to the line-up of stars and titles heading to the service.

On television, the spots will be placed around peak time programming on a range of commercial channels, including Channel 5 and its digital portfolio, as well as broadcasters’ VoD services and YouTube.

On cinema screens, the adverts will take premium positioning around some of the most anticipated films of the summer, such as Elvis and Thor: Love and Thunder.

Additionally, Paramount will leverage the reach of its owned and operated platforms in the UK and Ireland to cross-promote Paramount+ content on its free-to-air and pay-TV channels, including Channel 5, MTV, Comedy Central and Nickelodeon as well as the streaming services My5 and Pluto TV.

Launch night will see Channel 5 air the opening episode of one of the biggest hits on the streaming service under the banner ‘Paramount+ Presents – HALO’, with viewers encouraged to watch the rest of the series on Paramount+.

In a kind takeover of London’s West End, Paramount will transform the capital’s entertainment district into an homage to its stars, hit shows and entertainment brands. Augmented reality-enabled signage around all major installations will enable fans to interact with Paramount+ content and sign up for the service.

In partnership with Heart of London Business Alliance and Westminster City Council, a variety of large-scale installations and pop ups will include:

In addition, the Piccadilly Lights screen will feature an extraordinary HALO 3D anamorphic display to complement the large-scale installation on a nearby pavement.

Across the country, prime digital displays have been booked at major travel hubs and shopping centres in major cities, while the transport network will see buses and trams wrapped in the hero shows from the streaming service.

Additionally, Paramount+ will stage a drone show in Hollywood, Birmingham, one of the biggest ever seen in the UK, in partnership with Sky Magic. Plus, a projection of the famous Paramount mountain will be displayed on the lastminute.com London Eye.

Anna Priest, Chief Marketing Officer, UK, at Paramount said of the campaign: “We’ve launched an exciting, ambitious and far-reaching campaign to match the scale of the offering on Paramount+. This campaign is about unleashing the power of our brand and content to local audiences and is the biggest we have ever undertaken in this market. It blends the impact of mass-reach mediums with cutting edge new experiential technologies, like our AR-enabled Walk of Stars in London, the Drone Show in Hollywood, Birmingham and the anamorphic HALO display on Piccadilly Lights. We want visitors to our experiential wonderland to be surprised and delighted by the opportunity to interact with our mountain of entertainment.”

Priest continued: “Our agency partners have brought an abundance of creative ideas and unbridled energy to this project. Each one has worked as an extension of the team here at Paramount and that collaborative approach has been vital to the success of the overall execution of the campaign.”

Users will be able to sign up to the service for £6.99 (€8.30) per month/£69.90 per annum in the UK, after a free seven-day trial. Sky Cinema subscribers will get the bonus of Paramount+ included at no extra cost.